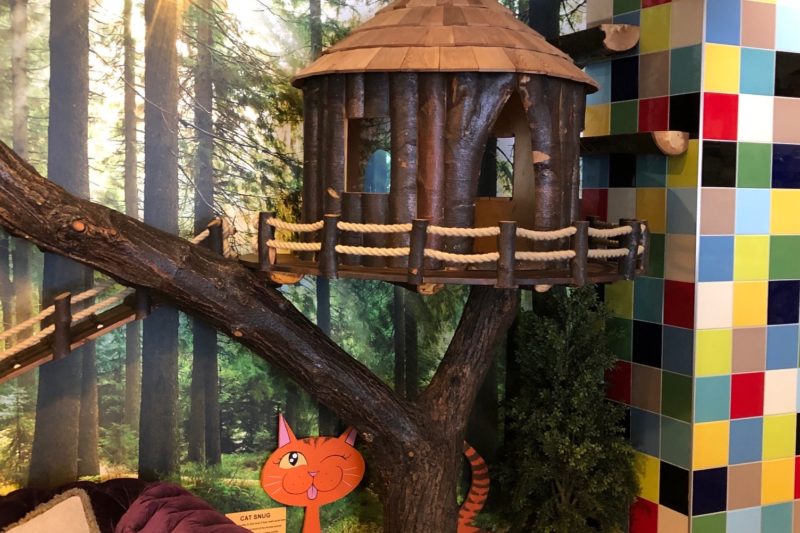 On Sunday I walked past a very colourful shop with three cats sitting in the window staring at the long queue of people gathered behind the rope outside. A concierge/ bouncer was keeping the crowd orderly although there was great excitement in the air.  The crowd was long and I was on a mission elsewhere, so I swore to return when it was less busy. This was not Annabel’s Nightclub nor an opening night gala. It is the Kitty Cafe.

I returned and was allowed entry. The cafe was funky and funny with bright vintage  furniture, murals, cat cushions, climbing poles, and a number of cats happily lounging around, chasing each other or being patted by the customers. They are rescue cats and they are available for adoption too.

At the counter a young woman dressed in kitten ears and a Mary Poppins Dress greeted me. The seriousness of the next protocol didn’t match her dress but it is very necessary. I was asked to pay my door fee of around $A10 which goes to look after rescue cats. Then I was asked to sign an agreement. Rules included

The place was packed with people and cats! A queue was forming outside. What’s going on here?! It’s a Monday! Why isn’t everyone at work? Oh…they are… this is lunch time! So after ordering my tacos (extra cost) I cruised the cafe patting cats and chatting happily with other cat loving patrons. There were office workers here for a dose of calm, a daughter had bought her elderly mother along. Her mother has dementia. There were young couples eating lunch and having a catty cuddle.

What was so joyful was the way people interacted with each other. We laughed at the antics of our furry friends, chatted about our own animals and in the hour I was there 4 people were enquiring about adoption. There were kittens in the nursery and cats are only in the cafe for 2 hours every other day…. so they could get a break from these crazy humans!

It was such good fun and so clever! One of those “why didn’t I think of that” ideas. It’s a fun and happy place raising money for cat welfare and adoptions. It serves a human need to interact with animals and other humans.  There are 5 permanent staff and a lot of student volunteers, all very well trained.  Three large rooms house patrons and cats. Kitty cafe is so much better than the dreadful rows of cages with sad looking rescue cats found at pet shelters. I had a great lunch, lovely chats, cuddled a few cats, played with the kittens and then headed out into the sunshine past the afternoon tea crowd.