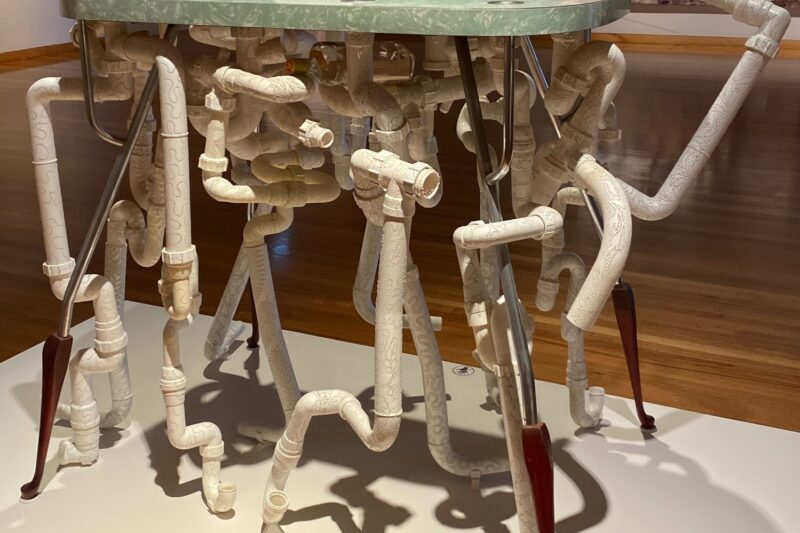 I stand before a crumple of plastic plumbing pipe, a laminate table and a gin bottle. The artwork is called “Incontinent.” It was created in 1997 by Fiona Hall. The explanation attached to the sculpture reads

Incontinent utilises bodily metaphors to comment on the crumbling of the British Empire, Queen Victoria and the Victorian Era. This work is inspired by the table at which Queen Victoria signed documents for the Australian colonies to federate in 1901. In place of the opulent wooden table with its leather top and gilded metal mouldings, Hall has substituted a 1950’s Formica kitchen table. Instead of an inkwell she has placed drains in the table top to which she has connected PVC pipes drilled with Victorian lace patterns. The work is a comment on the imminent end of an era and recognition of the fragility of the moment.

What? ………… It’s a load of plastic pipes! Ok call me a philistine and a heathen but all I see is plumbing!

I’m so excited because art galleries are open again and it’s like rain in a drought, art brings life to the human soul. Even Incontinent with all its plumbing pipes  tickles the emotions and curiosity. While I may have completely missed the plot in terms of  its meaning, is it still worth looking at? Absolutely! It may speak to many others of the thousands of people who will flock to galleries after a 4 month drought.

I’m at one of my favourite regional galleries in Bendigo. It never fails to disappoint.

In another gallery space is a collection of paintings and sculptures themed around childhood. There’s Alice in Wonderland, photos of mothers and children and then laid out as the centrepiece to the room is this large sculpture….. 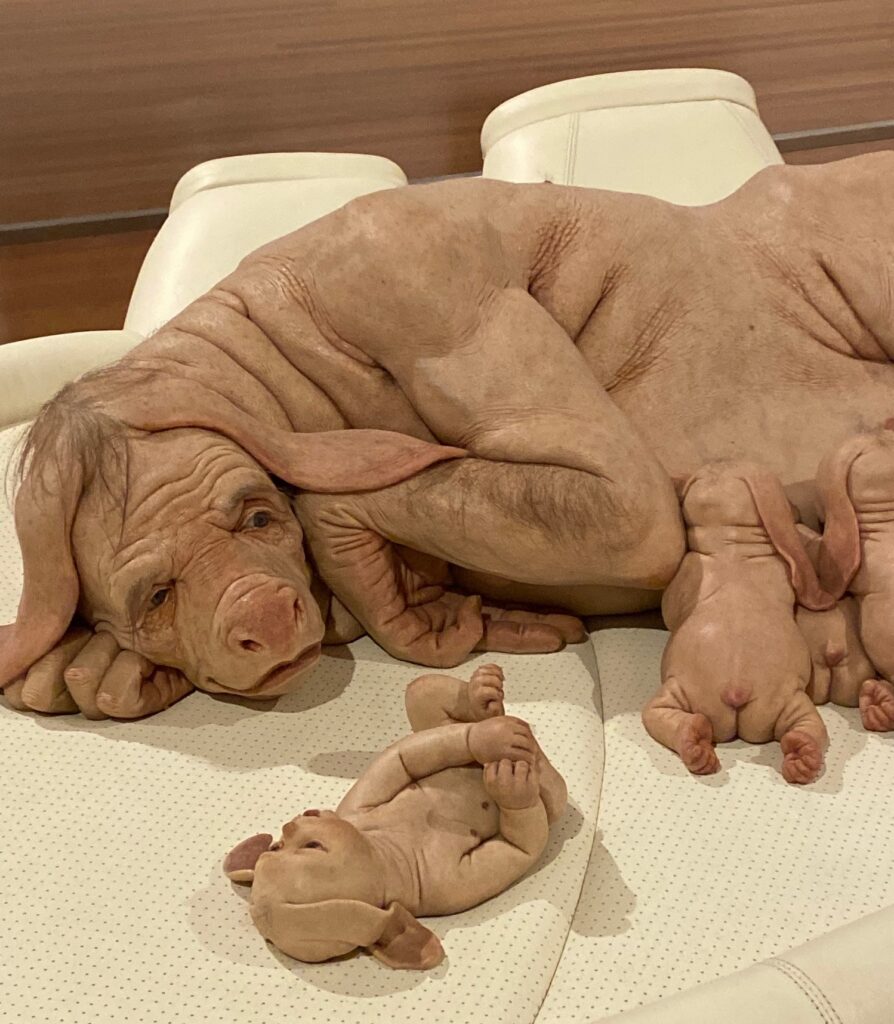 How did you respond?

Called the Young Family by Patricia Piccinini, it was created in 2002-3. Piccinini came to Australia from Sierra Leone in 1972.

My first response was “Eh what’s that?!” but when I saw the expression on the mother’s face it was one of love, exhaustion and purity. The artist had captured motherhood in its essence.

An aged sow-like mother, lies on her side with a litter of suckling pups, an archetypal maternal scene. Her expression is world weary and sympathetic. The eyes and skin of the mother seem very human but other parts of her body are very animal like. She has a human demeanour and maternal generosity. Piccinini calls her beautiful saying she is not threatening, but a face you could love and a face in love with her family.

I stand and look at the sculpture for some time, noticing the mixed detail of pig like and very human features. Young family alone is well worth the visit. 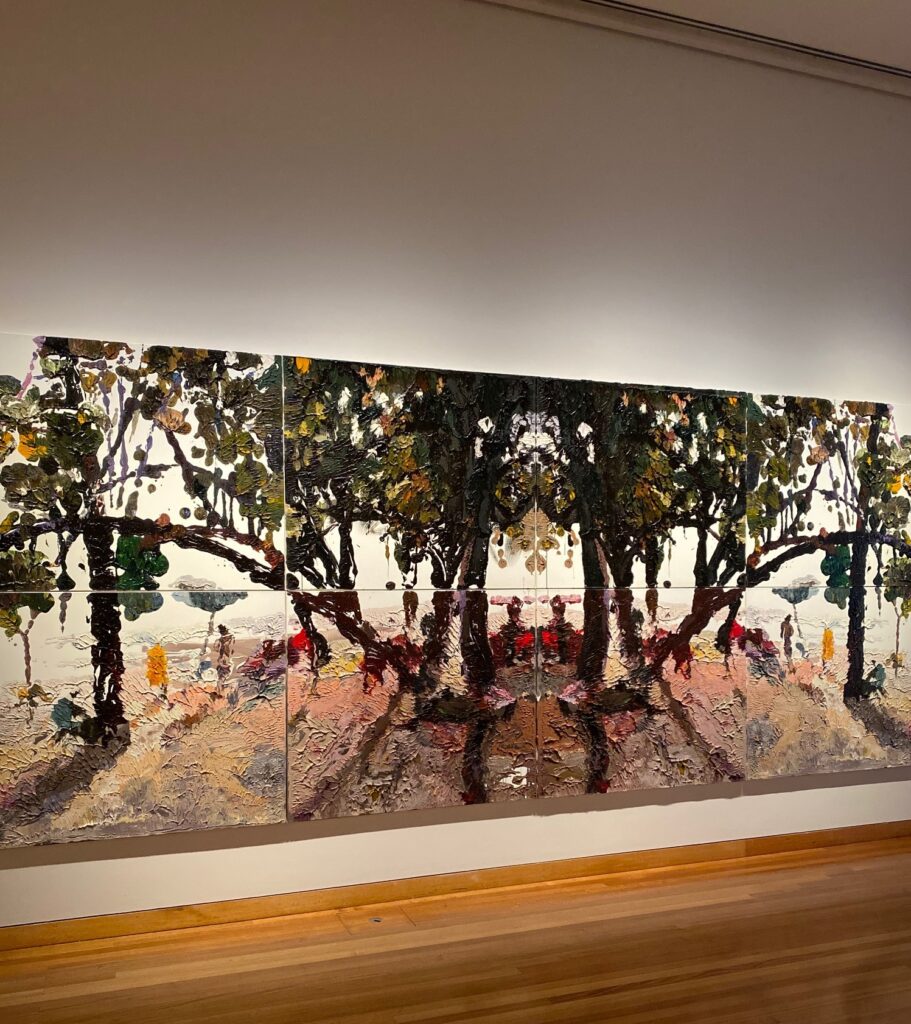 I wander into another room and find a massive Ben Quilty painting Kuta Rorschach no2 2013. It’s scale and intensity is powerful. The colours deep and rich. Oil paint is seared into the canvas layered in thick and visceral movements. It’s an epic. Wonder, joy, energy. it would takes weeks to really LOOK at this painting and see its detail. Ben Quilty is one of my favourite Australian artists and such a talented man with a strong social conscience.

My art gallery visit takes in so much more that I’ll share with you in coming weeks. But we head back to the question..what is art anyway? Is Ben Quilty art because its a painting and a known, familiar medium? Is the motherhood sculpture art because it inspires an emotional response- revulsion? sympathy? awe? Is the Incontinent sculpture “Art?” Perhaps ART simply comes down to the use of  imagination to create an object which tells a story, to evoke an emotional response? Is that what art is?

“The most beautiful experience we can have is the mysterious. It is a fundamental emotion that stands at the cradle of true art and true science.” Albert Einstein

Words and photography by Nora Vitins