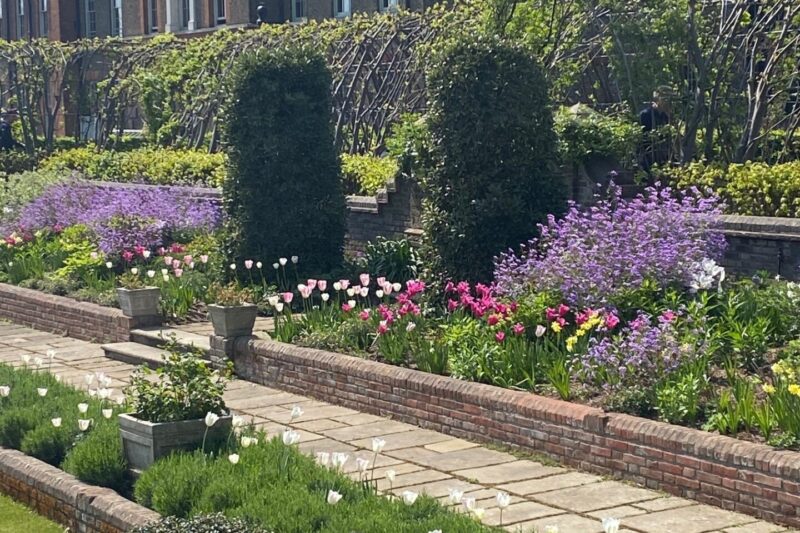 It’s 4am and I’m sitting in my little London hotel room looking out into a treed square of white Georgian houses in South Kensington. I’m bursting to tell you about my travels and its only been half a day plus a lot of getting here. I’m conscious it’s already 2pm in Oz and I need to post this story by 4.30pm……. so for this one, dear readers, the edit might be rubbish but let me share the story of getting to London from Melbourne after 2 plus years of lockdown and with Covid still sneaking around the world.

Let’s start at the very beginning… I probably bored you stupid with my last story about the 3 months it’s taken for the Australian Passport office to issue me with a new passport in the wrong name… or at least my 10 year’s ago married name… So when I arrived at Melbourne airport with my ticket in Vitins and  my International Vaccination certificate and New passport in Vitins- Sykes.. yes I too was a hyphen once…and being an anxious person I expected the worst.. I wouldn’t be allowed on the plane…

First travel  lesson…No one cared! But that played out after a 6 hour delay in my aircraft leaving Melbourne airport…scheduled at 11am… took off 5pm…. what does an intrepid traveller do when such  a dilemma strikes.. find the nearest bar/ restaurant/ lounge, which had me comfortably drinking wine and eating pasta for a couple of hours…..which is where I met Ben….

The lounge at the airport Parkroyal was set up for socially distanced dining which equated to some of the chairs being removed, so when Ben asked to sit at my table, I looked at this scruffy hobo eccentric and reluctantly agreed.  I stole glances at this grey-haired, ratty bearded little man with glasses, reading  a battered book  while sniffling in between soup slurping and decided I didn’t like him..it doesn’t take much when one sniffles in a time of Covid! But the hours are long and so we chatted. It turns out Ben is a doctor at the Hobart hospital, but an inveterate traveller, he was off for a 3 week stint on a small ship taking people to the Arctic circle…Ok ..this is interesting.. I forgot about the sniffles for a moment…… He’s the ships doctor for those 3 weeks for the scientists, photographers and conservationists who would be heading around Scandinavia and then the Arctic. From London he would be heading to Aberdeen to board the ship. Hours passed, stories exchanged, laughter and farewells.

I wandered into the International area of the airport but check- in didn’t open for another 2 hours….except a lovely Qantas man said I looked lost and could  he help. Clutching my swag of documents and steering my rebel suitcases, he called me to the counter and immediately checked me in. ” OH! You have 2 different names” he said… Oh here we go, I shuddered… ” That must be fun!” his parting line.. “Have a nice flight….!!!”

An energy bomb hit me as I wandered into immigration and customs.. I’m going to London! My International Vaccination Certificate QR code had worked, all my docs. were Ok...Have a nice flight! Oh I will!! So for the next 3 hours I walked around duty free and international departures..my racetrack. Most stores are defunct now..closed after the pandemic.. so if you’re thinking of buying Armani, Gucci or Cartier at the airport you’re out of luck… but at my end of the market I could grab a coffee from Brunetti and keep on walking! 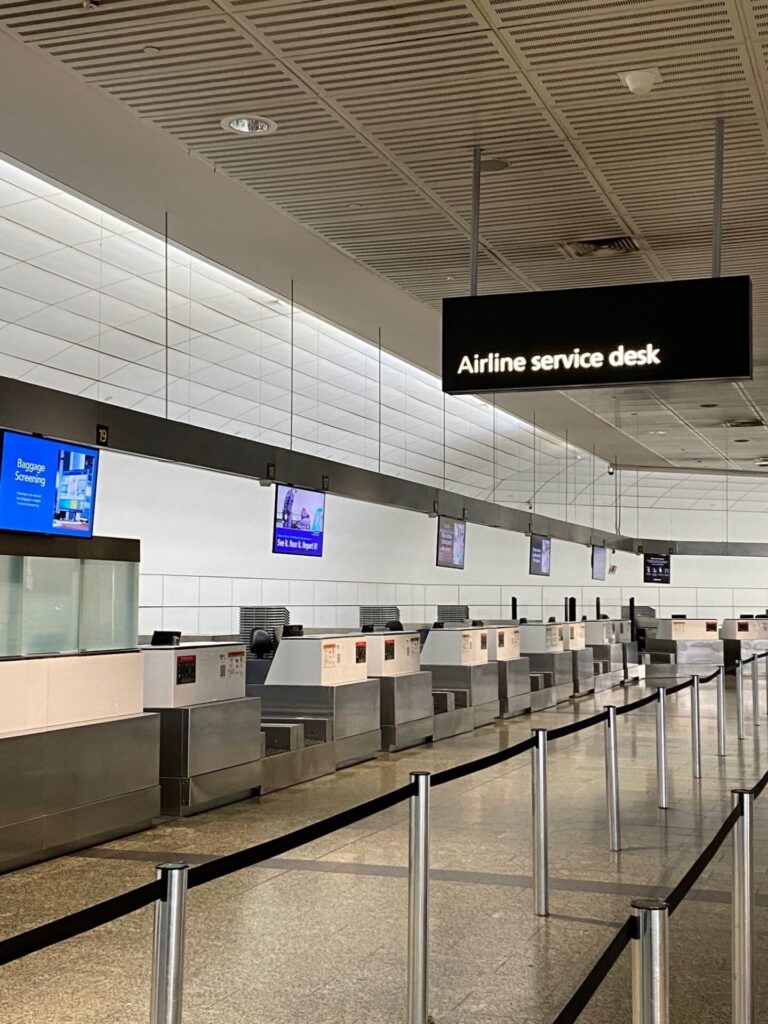 A full flight… and yep you’ve guessed it.. there’s Ben the Sniffler and yep…. he’s sitting in the next seat to me! But with masks firmly in place he tells me not to worry about the sniffles.. they’re benign.. he was Covid tested yesterday. (Incidentally if you’re flying to a country requiring a covid negative test, Melbourne airport has a big testing centre that delivers results for PCR in an hour) Ben and I chat away comfortably, 2 traveller friends. Were joined in the Window seat by a 30 something woman with long red hair and a pretty summer dress..no track pants for Adele…. There’s a technical fault so were delayed for another hour, but as the engines finally roar and after 2 long Covid years I’m TRAVELLING OVERSEAS..23 hours in a tiny box, breathing stale air, with 300 masked mad people like me!!

Adele, Ben and Nora become a travelling team..I love how quickly connections form and momentary friendships are made. We travel. We connect. Then we drift away….

Adele is going to Oxford for 3 years to do a Phd! Christ,  she’s amazing..stay tuned for this one…. her field, in my language, is something like spacial geo astro mapping to save the planet..Honestly after 23 hours I still have absolutely no idea  what she does, but its clever.

Now let me report plane food is 10 times worse than pre-pandemic… you may emerge from the capsule hungry or with indigestion. Fruit, clearly is not recognised as a food group by QANTAS… but the row 50 Economy class company was wonderful, the films great and a valium got me 5 hours sleep. Darwin “international” airport is hilarious and in a quiet back corner of the 2×2 ( inches that is) lounge, the 3 amigos took it in turns to demonstrate yoga stretches, star jumps and in my case, yawning in 5 different ways. We’re delayed in Darwin for another hour.

Back on the plane we follow the little map on the screen.. oh look there’s Kabul.. we’re flying straight over it! Oh look there’s the Ukraine and Kiev…. phew that was a bit close but we swerved, did a wide angle to avoid this war zone…nice one pilot!

Finally, drained but excited, we hover over Heathrow.. we hovered for another hour….unable to land because it was so busy..Ben missed his flight to Aberdeen but the Qantas purser was scrabbling around trying to get new flights for all the transit passengers. Finally, we were able to land..it was late afternoon London time instead of the scheduled 5 am but I was ecstatic! The plane spewed out its cargo and I readied myself for more long waits and lots of British stiff upper lip bureaucracy. Not so… an E passport check took 3 seconds, no one asked me for my International Vaxx Caertificate!!!!! You’re joking!!! The pain and tears of getting all these documents together…I raced up to an official – looking man standing watching queues sift through Immigration… I thrust the International Vaxx certificate under his nose. ” Excuse me where do I have to show this IVC? ” ” Oh miss I’m just security, but there’s no one here to have a gander. Exit’s that way”

John Cleese where are you? So it took 10 minutes from getting off the plane, collecting my luggage and officially entering the UK.

Next Heathrow express to London. Carting my suitcases I find a kiosk selling train tickets. The Transport man is flustered. The credit card machine is cranky.. do we have cash? An African – American man with a beautiful smile heads off to find an ATM. A tired older woman with her husband in a wheelchair is trying to find the car and driver she booked to take them to Brighton. The Transport man asks me to just wait a little longer while he runs off to find the driver. While we wait, we chat. The couple were in Spain visiting their grandchildren but can’t wait for a good cup of tea at home in Cambridge.  Our American friend rejoins us, cash in hand but our transport man is still missing.. so we chat. He’s from New York, here to see his kids in Milton Keynes.the transport man returns.  Finally success, we are on our way.

It’s like coming home to enter the tiny hallway of the New Linden Hotel. The window boxes neatly planted with spring flowers, new staff but the same friendly service. Within moments I’ve shed my layers, suitcases and anxiety and showered, in clean summery clothes, I head into the sunshine of Kensington Gardens, stopping to pick up a lunch picnic at Pret a Manger. It’s glorious.. that freshly mown grass smell, (gardens not lunch!) rampant crazy English dogs with equally crazy English owners. The gardens are stunning- Daffodils are finished and now tulips, cherry blossom and lilacs bloom.  A bevy of gardeners run around. The English have a way of enjoying sunshine gently. They sit in deck chairs and read. They set up a little easel under the trees and sketch or paint. It’s simple and effortless.

I sit on the grass and eat my lunch, take in the activity and yet calm around me. I’m in the middle of one of the biggest cities of the world and yet find stillness. No masks in sight. People stroll, take meetings while walking the park. Nannies chase children and chat to each other in language from afar.

I made it. I’m back in London with 5 weeks of adventures before me. I’m blessed.