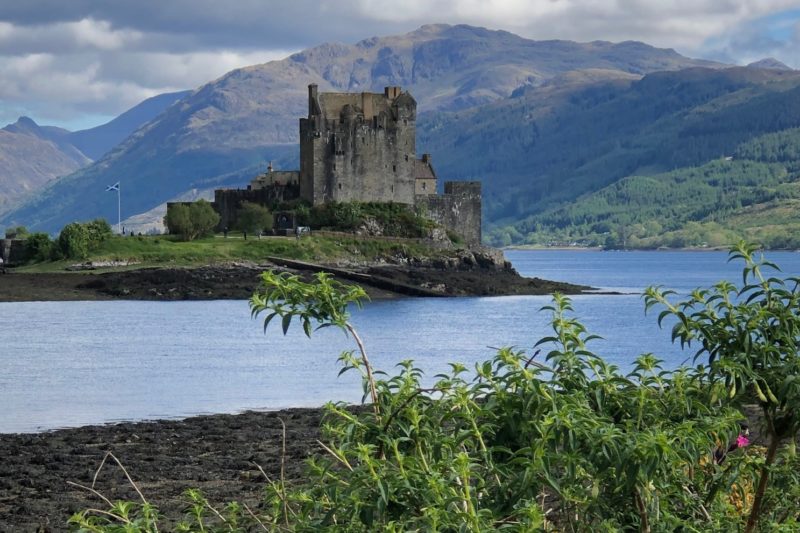 I’ve always been averse to guided tours. In fact, since the days of Sunday school excursions and school tours I’ve never been on a tour. Organised tours conjure up a busload of  rubber necked people sitting in an overheated bus, eating soggy sandwiches, leaky flasks of tea and a guide yelling ” Is everyone having a good time?” and ” Let’s sing Kumbaya” for the 9th time. I don’t play well with others in such an environment. Even as a kid, I’d be the surly figure hugging her back-pack for protection against this attempt to rein my free spirit into organised mob happiness.

But in the VIVA spirit and with memories of a hair-raising self – drive holiday along narrow country roads in the UK, I booked a tour of the Scottish Highlands. After all, this was a land of warring clans, big hairy “coows,” loch – dwelling monsters and whisky loving, wild highland men!

Rabbies was the tour company  I entrusted my life with for  a 3-day “ Highlands and Isle of Skye” tour. It’s a big company using small buses to ferry people around. It’s May- not yet peak season. Arriving at the Rabbies cafe in the centre of Edinburgh, efficiency was the order of the day. Hundreds of tourists converged on the cafe and were quickly organised in a welcoming and friendly manner. “”Pete will be your guide” said the greeter and within seconds we were on the bus – a clean, sparkling 16- seater Mercedes mini bus, luggage neatly packed away and gently making our way through the streets of Edinburgh towards the Highlands.

Pete began his overview of trip and set the scene. Toilet and photo stops every hour to an hour and a half (tick- 1st anxiety addressed- I wouldn’t have to put my hand up and ask for the bus to stop for a pee break!) Lunch would be an hour or so – do your own thing in carefully chosen towns that provided a variety of food options. Tours finished by 6pm every day. Portree, on the Isle of Skye was our base camp and Rabbies had booked B&B accommodation for us. The evenings again were our own. (tick, tick, tick) Pete picked us up at 9am every morning.

So we set off for a long day of driving 280 miles on the first day with stops at Callendar, Loch Lubnaig, Glencoe, Fort William, Inverness and then across the bridge to Skye. We  took turns to introduce ourselves- like the first day of school and Pete managed the introductions with interest, questions and respect. There was a husband and wife team from Charleston, USA and also a mother and daughter from California, a solo traveller from Canada,  a family of 4 from the  Phillipines and  couples from China and Norway. We were all squeaky clean and polite and the questions were very “first day of school.”

As we drove, Pete told stories of the places we saw. He knew the geology of the mountains and the history of the castles. Some stories were animated and he was a natural story teller. Pete created the voices of the kings and queens, showed us locations for TV and film shoots and unravelled the mythology of the faeries. This was not the text book learning of a tourist guide. This was a man for whom Scotland was his heart and a living  passion and he breathed its history, the heather and he spoke its truth.

There were quiet times. He knew when to let the mountains speak for themselves. Tall, proud and defiant against wind and snow the mountains stood as if  to contrast the vast  expanses of clear water in the lochs. And just when I was running out of gasps of amazement, a castle would appear in the mists. Music was an important part of the journey and we all sat reflectively and in awe of nature’s work, to the gentle sounds of Scottish music from all ages.

At the stops  groups started to form, conversations held and synchronicity established. The questions for Pete just kept flowing and stories and facts followed. Lunch was sometimes a sandwich in a town square or a bowl of soup with a fellow traveler.

Day 2 saw us touring Skye with Dunvegan and Glendale as stops. The wind lashed the coast line and the rain poured. We chose whether we wanted to walk to the light-house- about an hour’s walk along cliff paths, dodging sheep and climbing over a hundred steps back up the hill. It was magnificent to feel icy winds blast my face. Rain laughing at my Aussie light weight wet-weather gear…… The views were staggering and the sense of achievement immense. I checked my phone- only 6 kilometers but I had climbed the equivalent of 48 floors in the rain and wind. Invigorated we felt elated and laughter ran free.  As the wind thrashed the bus Pete played ” Highway to Hell” by ACDC…..Yep….. except its a single track road where you reverse if another car comes along and you dodge free- range sheep constantly.

It was a  great day with chimes of “Pete tell us a story about………” the pied piper had us in his hand. We dropped in at Talisker distillary for a tasting and learned about whisky making. After a day in wild weather I see why whisky is so soothing. That evening a few of us went to dinner and the conversations found a new depth. I had spent my career as a coach and consultant in change management. Many years ago a business retreat in Canada  had transformed my thinking and professional practice. It was a powerful experience. As we chatted, the 6 degrees of separation again became obvious. Laurel, the Canadian woman had also attended the same retreat of some 300 people that year and she also attended the same  event, as I did, in Ohio the following year! Then we found out one of the American woman on the tour also works as a business coach so another set of stories flowed……..and connections were made. Gently. Substantially.

On Day 3 we travelled 210 miles on the west side of the Highlands to Staffin, Uig, saw hairy coows at Sconser, and a stop at the castle of Eilean Donan. As we left Skye Pete told us the story of the “Skye Boat Song” and as we rolled through the mountains in the mist he played a beautiful version of this well known folk song. There was silence and a sadness that our trip would soon be over. As the song played people started singing the chorus quietly. It was a perfect moment when our little bus tribe knew this experience would end soon.

We wanted to know everything that day – Scottish indepedence, religions in Scotland,  history, the Jacobites and Culloden,  Brexit and the Standing Stones, Theories about Loch Ness, hiking Loch Lomond, the Munros, kilts and haggis..it was all in the ether of spirited conversation.

I generated great laughter when back in the bus after a visit to Loch Ness, my photo was shared. It was just water..no land, no trees just megapixels of water! It was declared the most artistic photo of the trip! 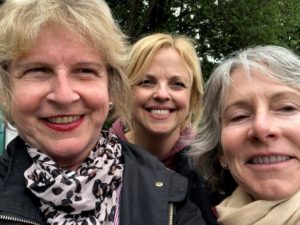 As the wilderness gave way to a highway we felt the intrusion of the other life into our bus friendship circle. Contact details exchanged, promises made and there took place the unraveling of one reality as it greets the new. What a trip! It was so nice just to be looked after and not have to worry about the detail. Pete was not a tour guide. He worked as a facilitator with a diverse group of clients- to educate, share himself and his love of Scotland in a way that will forever be etched in my memory. This country challenges you and has a power in its beauty, its song, its history and its weather. I don’t want to leave.