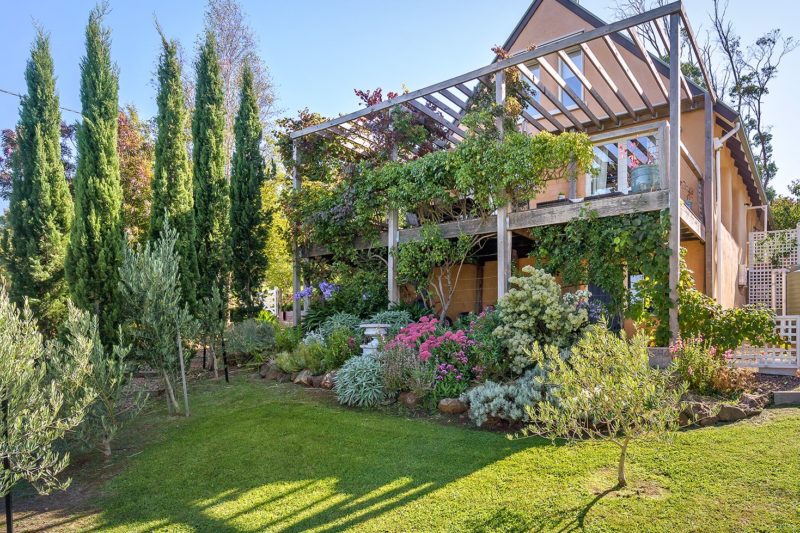 I started this article a few weeks ago when the Corona Virus was a ” Chinese phenomenon.” The world was a different place then. As we tutted and expressed concern for our Asian neighbours we went about our daily lives smiling and largely oblivious. And so it was with me. Selling my house was the main focus of daily life. I wrote an article about this 11 year passion project- The Straw House and its garden (Lifestyle 13 march 20) and you gave me lovely feedback about the story and photos. So even though the sale has been postponed until at least September I thought I’d take you inside on a tour of the tiny house. The irony is that I’m rather enjoying this cosy home at I sit out the social isolation months……

As I may have mentioned, a previous owner built the Straw House in 2000 and lived in it for some years. It was then used as a weekender and by the time I bought it in 2009 it was in need of some urgent repairs. Not quite composting…but very susceptible to little pigs trying to huff and puff and blow the house down…. if you know the nursery story! It was just after the Black Saturday huge bushfires when I decided to move to the country.  My marriage was in its death throes and divorce was looming. So far not really utopian conditions for buying a house made of straw in a bushfire zone! What was I thinking?

What did make sense was the community of Daylesford that has always attracted creative, foodie, nature loving, garden loving, health conscious, thinking types. I’d been coming here for years as a retreat. The spas, natural mineral springs, lake, foodie cafes and galleries are a huge attraction. And the tiny cottage on its bush block would be transformed into a French style nest in an English Country garden. At 59 I was invincible!

The first job was to make sure the house was weatherproof. Cracks had formed in the render that sealed the strawbales. The walls were repaired inside and out and the exterior repainted. I was lucky to find John who had rendered the house when it was first built and he traveled with me through many projects. The house is built on a slope and has high cathedral ceilings and a loft level with dormer windows that are very hard to reach. The design is all romance and hardly any practicality! I remember saying ” Now John. I’m off to Europe for 4 weeks. Can you repaint the whole inside of the house while I’m away? I’d like Porters Windsor White full strength on the walls and the same paint at half strength on the ceilings. Oh and you’ll need lots of scaffolding. See you in a month….” Amazingly we are still good friends.

I think you have to live in a house for at least a few years before you understand it. Your needs change too e.g I no longer use an office or print much. My laptop travels. While the recycled timbers were at first enchanting, in winter they became dark and gloomy. Storage in a small cottage was a challenge. Its as though I learned the story of the house as I lived in it. Then I rewrote some of its chapters. Silly things like getting the central island bench in the kitchen and having 4 power outlets wired into it suddenly made cooking fun. My Persian Love cake was produced for every family celebration with no fuss.

The aesthetic was to create spaces that looked open, crisp and like the garden,  created cosy spaces to rest and nest.The tonal palette of soft earth colours, the nod to French Provincial and the use of linen soft furnishings is in tune with the natural qualities of the Straw House.

As I repainted the dark wood the spaces opened up and the garden came into the house. It felt more like the home I had wanted to create.

When I bought the house the guest room was painted moss green. I was so excited about what the house could be that I never really noticed what was. When move -in day came I asked the removals team to put the 2 part QS mattress and base in the guest room. As I buzzed around the removals man came to me with a smile on his face.  ” Er..Nora…Bit of a problem..You’ve got a concrete base already in the room. Do you want me to put the mattress on top of it?”  What! I had completely missed the fact that I had a King sized concrete bed base and guess what… filled with straw bales! Some years later John  and his mate were again called on to smash the concrete and take it out with all the straw bales…a bit like a smashing a  Mexican Pinata only without the fun!  New tiles had to be sourced which took another year but eventually the guest room emerged as quite a lovely space. Its no longer moss green either!

It’s a happy home. It’s very much my home. I always think that you are only a custodian of property and like the land, one day the house will go on to live its story in the hands of new owners with their own passions. The house will be a central character in their new chapter.