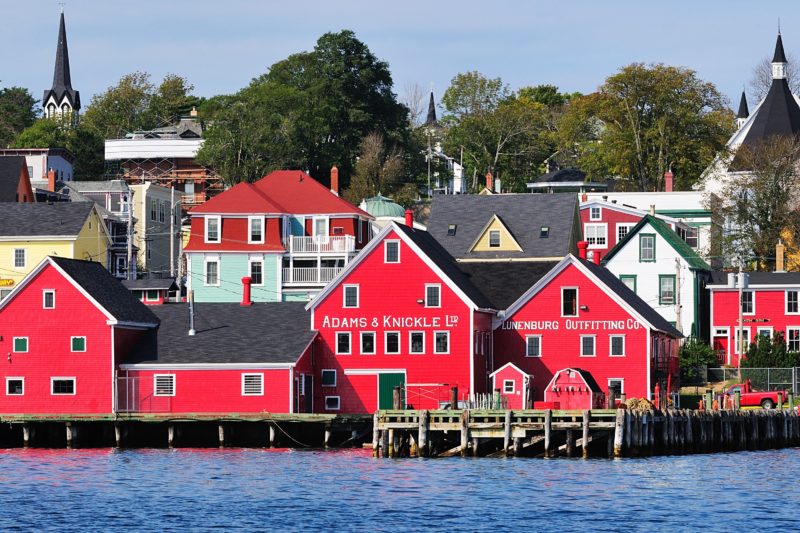 What a wonderful pre-Christmas present for our Viva 70 readers!  Our Canadian Viva 70 contributors have done it again! This is a story of people making magic happen. The recipe? Take a small group of people with a great idea. Let it ferment.  Mix in large dollops of passion that never sours.  Add in liberal amounts of skill, vision, goodwill and  the power of a collaborative community to make things happen. Mix in a generous handful of hard work, long hours, stumbling blocks and breakthroughs. Let ideas simmer and then boil. Then serve up the Lunenburg Documentary Film Festival in Nova Scotia Canada……… and savour the crowds delight! Enjoy this story. It is truly a gift. Sincere thanks to Inge and Maureen for bringing this to us.

Where do good ideas come from?  How do we continue to grow, learn and challenge ourselves at any age?  How do we build friendships, develop community and engage with people who don’t usually travel on the same bus as we do?  How do we embark on ideas which grow into big ideas and wrestle the fear and uncertainty that accompanies new adventures?  Let me tell you the story of my experience here in Nova Scotia, Canada.

It started almost 7 years ago. Over dinner with friends one spring evening, I was bemoaning the fact that there weren’t any good films showing in our area.  Thinking out loud I mused “wouldn’t it be amazing to have a documentary film festival in Lunenburg”.  As these things happen, seated at the table was a well known experimental documentary filmmaker.  She leaned over to me and said “let’s do it” I was a bit taken aback but with the glow of fellowship and maybe a little wine, I quietly agreed, why not?

Summer passed quickly.  I still had a thriving Folk Art Gallery and the summer Folk Art Festival took much of my time.  As well, the temptations of summer in Nova Scotia lured me away on more than one occasion.  One afternoon I found myself looking at the leaves beginning to turn gold and red and I realized fall was here. Just at that moment the phone rang.  It was my friend the documentary filmmaker.  Not mincing words, she told me that she was leaving for the season and wondered how we were making out.  What a question!  I hadn’t even started. I hadn’t even thought much about it.  However, at that moment I knew it was the beginning.

Within a week I had a group of people seated around my dining room table.  Some of us had film and theatre experience; others had an arts, academic or a business background. We all had experience in getting things done successfully.   None of us knew how to go about creating a documentary film festival.  However, we were all excited at the prospect and a core group of us moved forward, each of us with work to be accomplished over the winter.  I was ever so grateful to live in the internet age as we could continue our work, though often miles apart.

Our mission, we agreed, was to showcase documentary films, educate, inspire and entertain. We proceeded to brainstorm a name and logo for this festival.  It did not take long before we unanimously agreed to call this festival Lunenburg DocFest (LDF)and the logo has since been registered.  We love the chosen film bird. ( www.lunenburgdocfest.com )

The first year DocFest was held in the local theatre and the opening night gala held in the Fisheries Museum 100 seat theatre. Our first films were “The People of Blue Rocks and Bounty Into the Hurricane”. Response was better than we had hoped but we knew we needed to do better financially or we couldn’t grow or even survive.  During the next year we achieved a ‘Not For Profit” status, enabling LDF to issue tax receipts to donors. This was a major step in the festival’s development and necessitated that this ad hoc founding group create a formalized structure as required by government regulations.  Now this eager group of film lovers could undertake fundraising and advertising in a more professional way.  We also moved to the much larger Opera House, seating 250 people, the most charming of Lunenburg venues.

Now with our 6th DocFest successfully completed, and another year’s hard work before us I can’t help wondering, can we pull it all off another year – at some level it feels like a bit of magic that comes together each year.  Not only was LDF able to showcase a diverse range of documentaries for our community to enjoy, we involved directors and producers with audiences and with other filmmakers. The festival provided networking opportunities and professional development involving industry and government.  Some have said that the festival represents the most anticipated four days in this beautiful UNESCO heritage town.

As well, the DocFest Youth Program teaches young people to create their own films with their own voices.   Bursaries are granted to students pursuing postsecondary film studies.  For youth of all ages we organize an “interactive arcade”.  To top it off we hold Seniors Documentary Workshops for those 55+, whose work is then shown during the festival.

This year’s Docfest has been successful beyond any dream.  I feel we have not only evolved beyond a fledgling festival in a small Nova Scotia town, but more importantly, we are changing industries’ perceptions.  This year we attracted some of the best films along with their directors and producers. The opening night film was “Once Were Brothers: Robbie Robertson and The Band”.  The audience award was given to “Maiden”, an exciting adventure film about an around the world sail with the first all female crew. The presence of film makers gave the audience a chance to hear from the films’ creators during the Q&A sessions which followed each presentation.  Also, we are now on solid ground fiscally, with our passes pre-sold and our patrons, advertisers and volunteers returning year after year, growing in numbers. Funding is an annual challenge but one that fortunately LDF has been able to meet each year.

While the DocFest team recognize this success, we still solicit feedback and look to improve every year.  Ours is a dynamic group, creative and exciting to work with and I am forever thankful to be part of this amazing adventure.

What has my participation in this project taught me?

I am proud of the work we have done and of my contribution.  What I have had reinforced about myself is that when I feel passionate about a project somehow from somewhere comes the confidence in the belief that it can be pulled off. Working with a group of people who feel the same made this project a creative challenge.

On reflection, I feel I now have an openness that I didn’t have before.  Perhaps it is because of an awareness of opportunities missed in the past, perhaps from fear, perhaps just not being ready.  Now I am experiencing “being awake” to life’s gifts, to my own creativity and to the power of my choices of expression.  This realization has been a springboard to my creativity.   When thinking about the last few years I mostly feel humbled.  Because of a moment one summer night when I said ‘why not”, I joined a group of amazingly accomplished people and brought DocFest to life.

Huge thanks to Inge Hatton and Maureen Moffatt for writing this article especially for Viva70. com