Myanmar had never really been on my list of “must see” countries….until my daughter and her family moved there. As a solo traveller it would be great to have a home base, and insider knowledge of where to go and what to see. My first few days were spent in Yangon, the commercial capital of Myanmar  (it used to be known as Burma.) I was happy checking out the beautiful Colonial architecture and of course, the magnificent Swedegon Pagoda. It’s a city of stark contrasts – one minute you’re looking at a city that in many ways is in a sad state of decay, and yet the horizon is dotted with cranes building the new ‘lifestyle’ apartment blocks. But it wasn’t Yangon that was to be the absolute highlight of my trip, it was a magical place called Bagan… 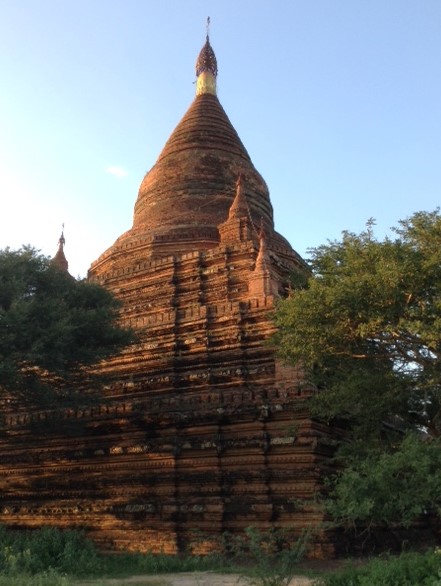 We had flown to Bagan via Mandalay, where we had spent a couple of days exploring. On arriving in Bagan we headed to our accomodation, which was a series of 1930’s-era bungalows near the banks of the Irrawaddy river. Thankfully, there was also a pool, which was the main event for my three year old granddaughter! After days of temples and pagodas, we were trying to think of things that she would enjoy, and one afternoon whilst out walking we came upon just the thing in the shape of a pony and cart!  Each evening, literally hundreds of tourists gather at the larger temples to photograph the sun setting over the valley that is filled with ancient pagodas. We decided to avoid the crowds and visit some of the smaller structures, many of which are off-road. What better way to see & appreciate them, than by taking life in the slow lane for a change!

It was with great excitement that we set off in the late afternoon. The carts themselves are brightly coloured, and don’t have seats as such, just several cushions to recline on. We asked our driver to take us into the valley, but show us smaller temples. Interestingly, nearly all the temples are of red brick construction and range in size from tiny cottage to cathedral. What is most striking is the sheer number of them concentrated in one valley. We passed one such ‘cathedral’ and there were hundreds of people on the parapets waiting to get that one magical shot as the sun set. By this time, we had the canopy over the cart removed so we could watch the moon rise. Our three year old fellow traveller was transfixed by the moon and the stars, and we lay in the cart singing songs and watching the sky change colour. Not once did she ask for the phone or the IPad!! 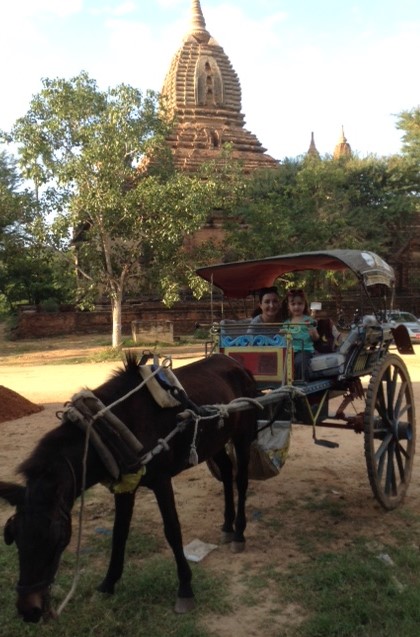 As dusk was approaching, we stopped outside a small temple and our driver disappeared for a few moments, returning with a small boy. The little chap was holding a huge old metal key ring with several large keys on it, and was going to show us the building. He opened the ancient wood and iron door, and both my daughter & I had a ‘Raiders of the Lost Ark’ moment! We entered a dark chamber with tall stone statues, the only light coming from a small torch. The boy beckoned us toward a very steep stone stairway with not much headroom. As we made our way up we had to duck our heads in several places. I was feeling a little anxious, but my granddaughter thought it was wonderful!

We could finally see light up ahead, and moments later we were standing on a parapet looking out onto the most amazing sight….hundreds of pagodas, in various states of decay and some of which seemed to have been reclaimed by jungle foliage. As the sun set, we stood in silence and tried to take in what we were looking at. Some of these structures are hundreds of years old, and in some cases a thousand years. Why are they all here in one valley? What was the purpose of so many? We didn’t want to leave, but the sun was going down and it was getting dark and so it was time for the slow journey back….The next day we only had one request from our little one – that we do it all again!! We were more than happy to oblige!