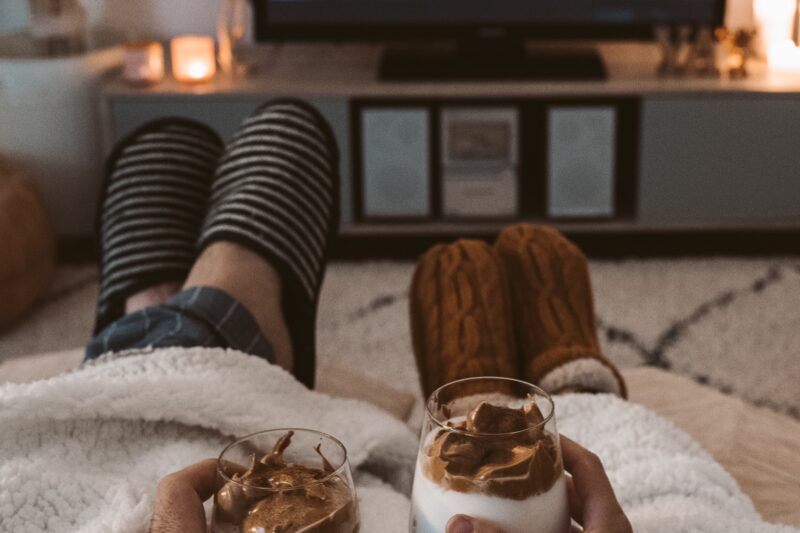 Lockdowns, winter colds and rainy Sunday afternoons are great times to catch up on what’s showing on streaming services. For winter I’ve extended my subscriptions to Netflix, Stan, Binge and Apple+ TV which gives me a huge range of outstanding content. I tried Brit Box but saw nothing but oldie re-runs..most disappointing. Which services do you subscribe too? Which can you recommend? How much time do you spend on free-to-air TV? Has the pandemic extended your viewing into new streaming services? Let’s have a conversation about what’s good and what’s not… and how to stay cosy and entertained this winter……

So get comfy. Make up some treats and head to the sofa. Here’s what I recommend for rainy day viewing…….

Surprisingly there hasn’t been much I’m excited about on Netflix now that my Outlander obsession has completely faded. I did watch Halston about the fashion designer’s bio. with a largely uncomfortable looking Ewan McGregor trying to pull off this role. It’s hit and miss. Worth looking at if you like fashion and its intrigue but not super exciting. He flounces and prances, acts moody and leads with his ego but it’s a hollow characterisation that lacks conviction.

Do you feel like an easy romp in a world of young, attractive professionals living the good life in New York? Younger is funny, gentle, romantic and with no great human insights or meaningful deep dive into anything! The story revolves around a 40 year old woman who lies about her age to get a job in the world of publishing. It’s a story about her adjustment, her friends who are in their 20’s and the backdrop is New York city..with its bars, galleries. fashion and shots of Central Park.  Relationships form and dissolve and the big question is…will Lisa end up with Charles, the owner of the publishing company or Jake, the younger tattoo artist. It’s in its 7th season and it’s simply fun!

Wall street excess meets Government regulation…… This is a great series that I became absolutely hooked!!. Damian Lewis plays Bobby Axelrod, the owner of Axe Capital who runs his business barely on the edge of the legality. He’s rich, obsessive and not a likeable man in many ways but he’s brilliant in this role. Paul Giamatti plays Chuck Rhoades the US Governor who is always trying to outsmart Axelrod and bring down him and his empire. The one question this series explores with great finesse is – How will Bobby Axelrod get out of this situation? Like any good hero he does always come through.. sometimes bruised and with losses but he’s smart and will play dirty if money is at stake. Outstanding acting, great storylines, complex characters, tension and intrigue and 1990’s corporate excess comes alive in the present. Series 7 shooting was halted due to Covid. Damian Lewis then lost his wife to cancer, the wonderful Helen McCrory…. so I’m unsure if there will be further episodes but I do hope so. It’s outstanding.

We Are Lady Parts

The adventures of a  Muslim Punk girl band  is the subject of this very funny, ridiculous comedy. I so want it to work. Some of the characters are fantastic but the story wanders a little and is too loose to make viewing completely satisfying. Take one conservative British Muslim girl, looking for a husband and more in love with Barry Manilow songs than her Punk sisterhood and follow the exploits and mayhem of this group, the dialogue is funny and clever but it needs better scripting to take it to the next level. It’s still worth a look.

Leaving some of the best until last…….  Check out……

Kate Winslet is outstanding as the small town detective trying to solve the murders of 3 young women in her close-knit community. Set in the mid west this crime drama is so well written on so many levels. There’s the small town element, family dynamics, divorce and parenting/ grandparenting and her own identity as a woman struggling in this close knit community. Winslet is outstanding.

Frances McDormand recently won an Oscar for  the film Nomadland. In Olive Kitteridge she plays a crusty, suffer- no fools, life is a disappointment type older woman. It’s a great story and she brings a barely likeable presence to the role.

This documentary explores the craziness of the Woody Allen/ Mia Farrow relationship, their tribe of adopted children and the legal case of child sex abuse bought against Allen. He later went on to marry one of Mia Farrow’s adopted children, Soon Yi Previn. While celebrity stouches  and child abuse are not really my cup of tea this one is interesting because of the work of Ronan Farrow, the son of Mia Farrow and Woody Allen. He is a journalist in NY and famously wrote investigative articles about the Harvey Weinstein sex abuse cases reported in the New Yorker. He’s very impressive and the story of his parents is bizarre and very sad.

So that’s the round-up of programs that you may enjoy. Programming on streaming services has come a long way in a very short time and there are some excellent stories to explore attracting major talent. The pandemic has seen a surge in outstanding series and for a very small monthly investment you can make those rainy days and winter appear more cosy! Enjoy!