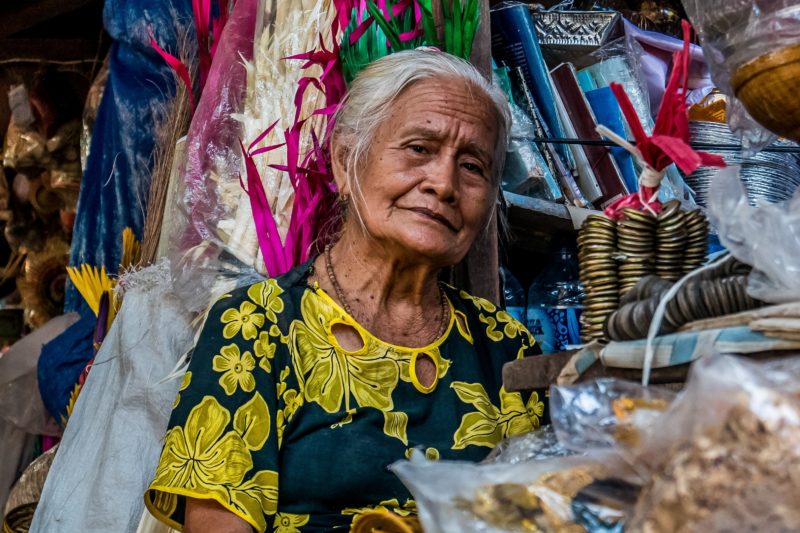 Let’s travel in our memories and our minds as we read another lovely story from our dear friend and author, Graeme Leith. Graeme was a frequent traveler to Bali like many of us over the years. As I read this story I can smell the kretek cigarettes and see the bustling marketplaces, the men with their headbands, white shirts and sarongs dressed for the temple and the ever smiling little children rushing out of school to greet the food-seller with goodies strapped to his bicycle. Enjoy this armchair travel until we can again board the big jets to take us to distant lands…….

Today I have to buy some plimsolls so that I can do some earnest walking with Alice, the earnest Swiss lady. Jane needs to buy some blouse or dress material, for Nyoman. The shop over the road has no work for her trusty little treadle sewing machine, so we decide to go to Amlapura where there are serious shops and markets. It is less than 20 km away, so we decide to take a Bemo, which is usually interesting. As we pass the office counter on the way out, the manager, our friend Budi, asks where we are going and why.                Wayan the driver is with him and when told we are taking a Bemo, for fun, looks disconsolate and confused. Why would we take a Bemo when he has a perfectly good clean car there to take us?

So we leave them to their speculations and go  across the road to hail a Bemo, and the first one to see us stops, as they always do. They are small orange Suzuki vans with a bench seat up each side in the back and must be 25 years old. At 60 hours a week driving at least, they have done formidable mileages to which the worn and dented floors and the tortured vinyl seats bear testimony. There are already four locals inside and a child’s bicycle tied to the back of the front seats when we get in. Another lady hails us 50 yards up the road, gets in and we are off to Amlapura.

We are out of town, just approaching the winding road uphill when a man with a very large bag hails us. The driver stops, grabs a piece of poly rope and the two men lift the heavy bag onto the roof and tie it on, and we’re away once more. Next stop is for a man with a disassembled table which goes in, in front of the bicycle. It’s getting really crowded in the Bemo now, after all it’s only about 10 feet long and 4 foot six wide. The lady next to me, I realise, is English speaking and it transpires she comes from Rosebud near Melbourne. She’s going to the “ white sandy beach ” for the day, and we joke about the lack of airbags and safety belts in the Bemo. She laughs and says “You do a lot of things here that you wouldn’t do at home, but that’s half the fun, isn’t it?”

Next stop is for the man with the disassembled table to get out at a roadside stall and for reasons best known to himself return with a litre of petrol in the ubiquitous soft drink bottle, which goes in too. Surely we can’t hold any more, but, lo and behold, 500 metres on is another man, who doesn’t have any luggage so sits on the step. The unwritten law of the Bemo seems to be – “The Bemo is Never Full”

Soon the man with the disassembled table alights with his petrol and his table, then after his departure we wind up a little bit more of the mountain road, seeing through the trees and shrubbery little houses and huts with their dogs and pigs and fowls at the edge of the jungle beside the road. The Australian lady takes her leave. As we approach Amlapura the man with the heavy sack terminates his trip and the driver has to untie the load and slide it onto the man’s head. He slips the driver his 2000 rupiah and staggers up a laneway, legs buckling under his load and we travel on, to Amlapura.

The rest of us alight at the market, where waves of highly coloured fruits cascade down to the ground where lie the containers of flowers, thousands of single blooms picked that morning and for sale for offerings. It would be optimistic to expect a single bloom to last more than half an hour off the tree at home in such warmth, but here the high humidity keeps them fresh all day, the same humidity that ensures that clothes take all day to dry, in the sun.  So we pass through and between these stalls into the cavernous interior where high above there seems to be a ceiling made from pieces of canvas. Here now are the nuts, the pulses, the herbs and spices and this leads us on to the stalls displaying all manner of meats and fish but no bread; having rice the Balinese have little need for bread.

But our mission takes us to the other side of the market where there is a shop that might have the canvas plimsolls that I require and in the appropriate size, and we continue on, through glassware and plates, pots and pans, in fact through a whole cornucopia of anything that a householder might need; and behold, our sports shop beckons, just over the road. Yes, they have the plimsolls, just big enough, and we pay our money and go out into the streets again. Jane is unusually affected by shopping frenzy today and found the market  a little claustrophobic, so we take to the footpath because I want to track down a little warung, or cafe’ that we went to last year and surprisingly we turn a corner and there it is. There is a dressmaking material shop over the road so Jane dashes across to that to make a purchase and I go in to order a meal by pointing at the shasliks they’re  making; it’s a sort of ”one meal fits all” place. From the fridge I select what I think is soda water for Jane and a cola for me; it transpires later that the cola is cold tea and the soda is a sweet energy drink, so we swap and all is well. It’s a Muslim cafe and the meat is goat, there’s a soup, a plate of rice and ten little shasliks and it is as delicious as last time, last year. There are some strange bits and pieces in the soup, of uncertain and mysterious shape and texture, and those I eject onto a spoon and I realise that that’s what I did last year. I find out later that they are pieces of offal of various sorts, including intestine and are a major contributor to the unique flavour and texture of the dish, but that is not obligatory to eat them. A mere 50,000 rupiah later (six dollars Australian,) we’re back on the road outside to await a Bemo headed back to Candi Dasa. 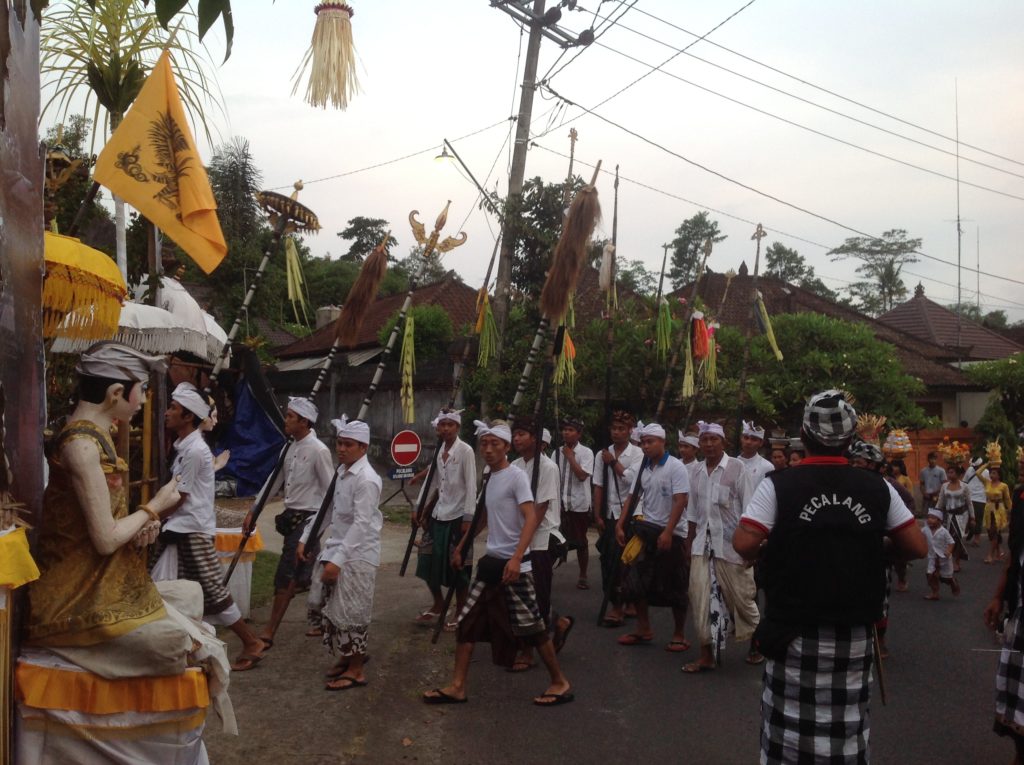 The first one to appear has very large baskets strapped to the roof, and as it stops and we enter it is revealed that the interior is almost full of baskets as well and the baskets are full of chickens. The Bemo must have close to 2000 chickens in or on it, plus the  driver and three other people, for there is a lady behind two of the baskets, a lady who, having bought them at the market is taking them home to fatten up for a couple of months. We are having a friendly chat and in affirmation of our friendship she takes a chicken out of the basket and gives it to Jane to hold and pet, and Jane being of a caring and maternal disposition is happy with that. There are, mercifully, few passengers waiting for a lift, it’s still early to be returning from the market. Two very well-dressed women are waiting and after seeing the congestion of chickens and legs in the back of the Bemo, the legs mostly mine, they opt to squeeze into the passenger seat beside the driver.

Soon the chicken lady indicates a lane to our left and the driver turns in. 100 metres on and we turn right into an even narrower lane and the chicken lady indicates, 50 metres on, that this is her house. Children appear from an even smaller lane leading to the rear gate of a house, the chickens are unloaded and are transported away, the driver is paid and left to his own devices as to how to extricate the Bemo, which he manages after doing a five-point turn, backing into a gateway. But we’re not on the road again just yet, a car has since been parked just where we need to turn left now to get out of the lane and the rear wheel of the Bemo is poised perilously close to a gaping hole in the footpath, below which water runs. But there are five or six men to direct us, some appear to be saying “Go” and others “Stop” and half the tyre is on the concrete and the other above the abyss. But, due no doubt to the benevolence of the Gods in appreciation for the offerings they are twice daily given we don’t fall into it and are soon back on the main road to Candi Dasa.

We stop twice outside schools, and a group of three and then four immaculately dressed schoolboys join us, they speak just between themselves and soon pay their money and alight, all magnificent specimens of homo sapiens, all handsome, with immaculate skin, musculature, teeth, hair and with an obvious easy intelligence. One of the perfectly dressed ladies in the front turns to us; “You are Australian?”  “Yes”  “You go to Candi Dasa?”  “Yes”  It occurs to me that I have seen this lady before. “Where do you work?” I ask. “Legong”-  Yes, of course I recognise her!   “Are you working with our little friend Petu?”  “ Yes”.  We laugh and I say, “We’ll see you at the Legong for coffee tomorrow.”  “ Will you be there?”  “ Yes, see you there!”   Of all the gin joints in all the world, number 34.

We trundle past the lagoon to come to our homestay, Kelapa Mas, to be smilingly interrogated by Budi and Wayan as to what we’d bought and what we thought of the Bemo trip: “Interesting,” I say, “a Bemo trip is always interesting.” 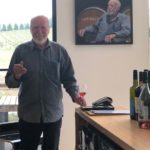