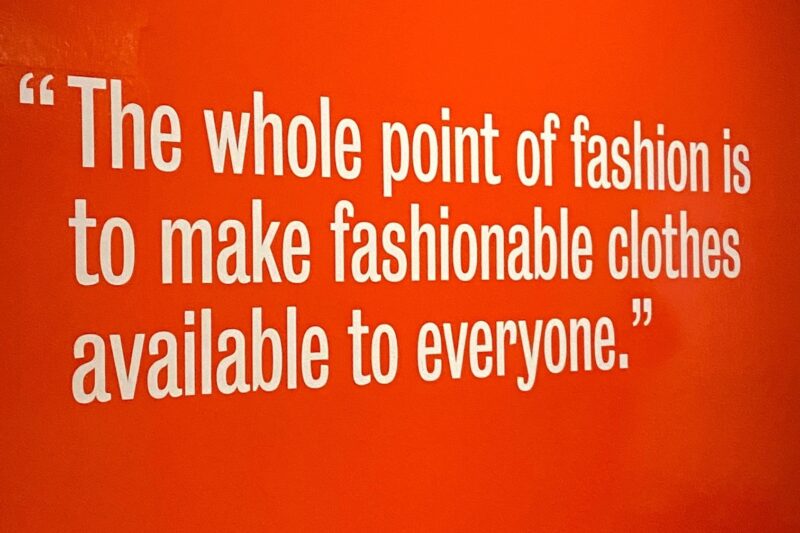 The Bendigo Art Gallery has done it again…secured a major international exhibition that is simply brilliant….what pandemic!!??

This regional gallery in central Victoria  demonstrates time and again its capacity to build relationships on the world stage…this time with the Victoria and Albert Museum in London, and navigate insurance, exhibition design and the numerous challenges in bringing a major international exhibition to a regional city when most of the world is in covid Lock- down.!!  But here it is..until July 11th 2021 and I was lucky enough to book during the first week and avoid crowds with my 10am visit.

Immersion in creativity, nostalgia for 1960’s Britain and for the first time understanding the revolution Mary Quant created, are my take-aways from this exhibition.

Who is Mary Quant? Now in her 90’s Dame Barbara Mary Quant or Mrs Plunkett- Greene DBE is a fashion designer, born in Wales who went on to disrupt fashion as Britain knew it and became a global brand. As a teenager in the 1960’s in the UK the fashion scene only reached Nottinghamshire villages via magazines and the one pop music show that appeared on black and white TV on a Sunday evening. Mary Quant was a London phenomenon. Little did I know the impact she would make.

What I love about the exhibition was its organisation around key themes which answered the question…why was Mary Quant so revolutionary?

To understand her impact you need to be aware of what Britain was like before 1960. Britain in the late 1950’s was a pretty dour place and fashion belonged to the upper classes. Designers like Norman Hartnell and Hardy Amies designed for the queen and the wealthy. The young woman in her 20’s who worked in the stocking factory in Nottingham could never dream of a designer anything!!

Mary Quant is revolutionary because she wanted fashion to be accessible to everyone.

Mary Quant was revolutionary because she was an innovative designer

Mary Quant introduced the mini skirt, used new materials like plastic in her design and created playful clothes that broke the staid matronly look of the old fashion houses. This was a look for young people…a generation growing up to change the world of 1960’s where London just happened to be swinging!!! Models danced on the catwalk instead of walking sedately with an aloof gaze. Music at fashion shows was loud and famous pop stars could be seen wearing Mary Quant clothes.

Mary Quant designs were soon found world wide. Her clothes was only one arm of the empire. She understood that the young woman earning a few pounds a week at the stocking factory wanted to own a Mary Quant design. So merchandising exploded. There were shoes, handbags, stockings  and make-up. Now the factory workers might be able to own a Mary Quant lipstick. She even created a dress up doll collection so younger girls would be brand savvy at an older age.. This business model was absolutely disruptive to the fashion industry and the world of business way before we knew the term ” disruptor.”

Mary Quant was revolutionary because she new the concept of celebrity pull even before there were words for it!

Celebrity created an image of a fun, out there, young and vibrant world that young kids wanted to be part of. History aligned ..music, women’s lib, drugs and the  way of challenging the established order. She was in the right place at the right time but also she led the charge to change the world of  young people in 1960’s and beyond.

There’s so much more but I really hope you find time to visit this exhibition at the gallery or through online resources. It’s one of the best!