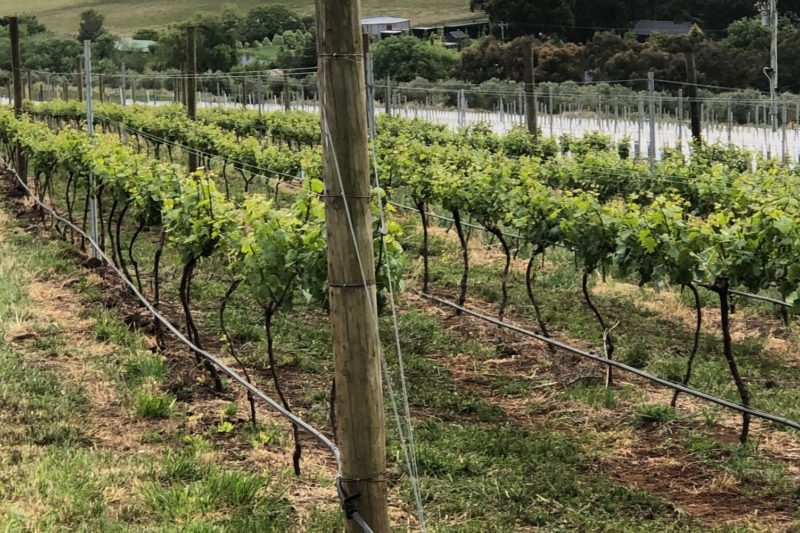 Six Degrees of Separation. I met Graeme Leith some months ago. Friends gathered to have lunch with him at the winery he established. Passing Clouds. It was a pleasant lunch overlooking the neatly planted rows of vines. He’s written a book about his life of winemaking and he generously gave me a copy. (Passing Clouds – A Winemaker’s Journey)

I spent a day and into the night reading his story. Gripped.  It was so many things. A beautifully crafted narrative of the many layers of a man’s life. A Boys Own adventure tale. A story of love and humanity. The tale of a man’s passion, vision and drive to create Passing Clouds wines and build a thriving business in a crowded market.  An enthusiast’s guide to the intricacies of winemaking. A devastating tragedy and the struggle to go on living.

My binge reading was also egocentric. Throughout his story there were points of connection, our paths touching around people we knew in common and places we had been. As I read through the night I was heard to say to myself…….. ” No! You studied Italian at the University in Perugia? Me too. Or “Really….You know John and Stefano? …me too!”    “You lived in Stanley on the NW coast of Tasmania! No one knows about Stanley… I go there every spring…ME TOO!”  Six Degrees of Separation.

So now I’m driving through the rolling hills heading for Passing Clouds winery to meet up with Graeme and find out more about this very interesting man. A pleasant morning of storytelling and memories shared as we drink coffee and munch on cake. 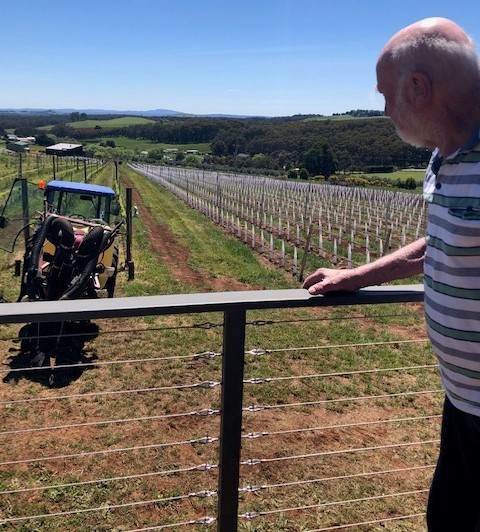 Graeme is approaching his 8th decade with titanium plates in his knees and a golden sense of humour. The book he has written about his life is a ready- made source of information for me.  He writes fondly of his family and school boy adventures in the northern reaches of Melbourne. His father was a skilled coach maker and later had his own panel beating business. Graeme’s mother was a costume maker at Her Majesty’s Theatre in Melbourne. This was a position seen as the pinnacle of a costumier’s career and acknowledged her expert skills. His father died when Graeme was still at school. In 1955 aged fifteen, Graeme began his working life as an apprentice electrician. Many adventures followed. A passion for motor bikes and cars and roo –shooting in Broken Hill to raise money for a trip to the UK. It was a rite of passage, a pilgrimage undertaken by many young Aussies to travel to the mother country. Touching the age of 21 in late 1960, Graeme and his mates hit the streets of swinging London to join the Aussie diaspora at Earl’s Court and straight into work. A trip to Perugia on his trusty two-stroke Lambretta through France, Switzerland and Northern Italy followed……somehow he made it…… and here a 12 week language course and many other adventures were waiting. Love and wine are the threads woven through Graeme’s life and Perugia was fertile ground for both. He met Vosje in Perugia and they married and returned to Melbourne. They had two children Sebastian and Ondine, a family weekender in Daylesford and a Fiat 500 to get them around. Wine making became an interest among the group of friends in the suburb of Carlton where many Italians lived in 1970’s. Carlton was the Little Italy of Melbourne and Italians knew about making Grappa.

A marriage split saw Graeme working on a construction site in North -West Tasmania and then as deck -hand on a cray fishing boat before heading back to life in Melbourne. Here he became involved in the alternative theatre movement- from electrician to actor to writer. He fondly calls it “A scruffy group of unemployed actors with big heads.”

With new love Sue McKinnon, the interest in establishing a vineyard grew and in 1973 they purchased land at Kingower and began building their dream. In 1976 they moved there permanently. Graeme’s children, Ondine and Sebastian were now 12 and 10 and came to live with Graeme and Sue on a permanent basis. It was a full life studying viticulture, working, involvement in local theatre and a swathe of friends visiting. Fishing and camping trips with Ondine and Sebastian were always an adventure as was the first vintage in 1980. In 1984 they won a gold medal with their first show entry at the Royal Melbourne Show but there was something lacking in the relationship and Sue moved back to the city.

Graeme married Julien in October 1984. Ondine, Sebastian, Julien and other family members spent Christmas Day together. “We had as good a Christmas dinner as it was possible to have – good food, good wine, much laughter and much love, ending the night with Ondine and I having one of our mock-arguments in part Italian, part English and part laughter; we both so much loved to act.”

Ondine and her boyfriend David were heading off to Guerrilla bay on the NSW coast south of Sydney on 27th December. What happened next is horrific.  Ondine and David did not arrive at Guerrilla bay. They were murdered by an unknown couple who were heroin addicts. Both were members of the Australian army. Ondine was 20 years old.

Friends and supporters rallied but grieving and healing is essentially a lonely process. 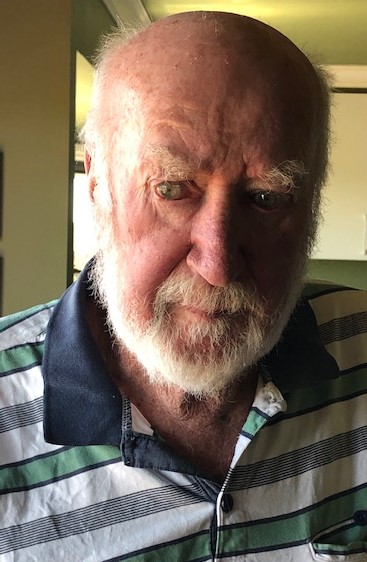 Julien and Graeme had bought a block of land in Daylesford in 1984 with a plan to retire there. No retirement but they did move to Daylesford with their 2 children. Sue Mackinnon returned to the Kingower Vineyard to resume her role as a working partner. In 1997 Passing Clouds winery purchased land at Musk and the dream of a new vineyard with very different climatic conditions to Kingower, was taking shape. Graeme decided to expand production, improve processes and build collaborative partnerships at Musk. By 2007-08 Graeme recognised he was getting older and a succession plan needed to be put in place. Cameron, his second son, had taken an interest in wine-making and completed an Oenology course at Melbourne University. A cellar door was established at Musk and Cameron took over as wine-maker.

Wine – making is an unpredictable, tough business. Droughts take their toll.  Why do we do it? Graeme asks in his book. His response

“It’s a succession of journeys, from vintage to vintage, each one promising something different from the one before, sometimes better, sometimes worse but always different and always with the enticing, tantalising possibility that we can make wine better than we have ever made before.” 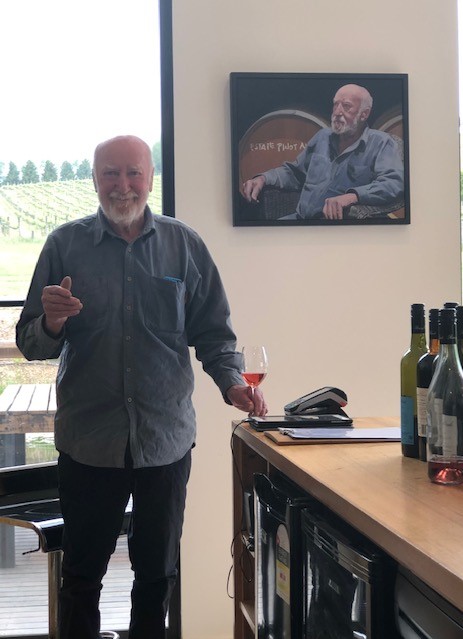 What a life story…! To finish, I ask Graeme the questions I have asked of other interviewees.

What are the challenges of life at this age?

One big challenge was having an alternative for work and building this (the vineyard) for the last 20-30 years. I hadn’t thought it through and it was a huge hole to fill. I didn’t do the transition well and felt totally lost… even though I knew it was time to hand over the reins to Cameron and stand back.

It makes you aware of your mortality. I had clinical depression through this period and the pain of Ondine’s death is never far away. Crippling arthritis and suicidal grief are powerful forces to deal with and somehow I got through it.

What are the things that are still on the bucket list?

I have a screen-play and a collection of short stories to finish.  I’m surrounded by good friends and I have the time to enjoy their company.

What’s your advice to others about ageing well?

Keep fit. Look after your body and keep exercising. Keep your brain working. Have something to look forward too. Be unselfish. Give more than you take has been my

I drive away from Passing Clouds clutching Graeme’s book and stories he has written, touched by our conversation. It’s taken me over a month to sit down and find a way of writing about his story and perspectives on life. I have “life intrudes” excuses but it’s more than that. I wonder at my hesitancy. Writing about his story seems difficult and I want to do it well. How do I portray the richness, depth and spirit of his life?

My mind often resorts to images, colour- the visual as a sense making process. I think of a Rubik’s Cube. Turn the cube and you see a pattern emerging. Turn it again and the colours re- form and you see things differently-a new perspective takes shape. There’s so much here. He’s a man of many talents and interests- wine-making, business, writing, food, theatre. When I turn the cube another way, another pattern emerges.  I see his comedic charm and an archetypal lovable rogue Aussie. His romps through London, sleeping under the Hammersmith Bridge in his suit, rewiring the electricity meter for a mate to outwit his landlady. There’s a larrikin here with charm but also an astute intelligence. Turn the cube and there’s the emotional tale of survival, resilience, living with grief. It’s a transformative story of the human spirit, supported by those who love and care for him, moving forward. Sadness is always a moment away but he survives. They did not take his life too.

Thank you Graeme for you generosity of spirit in sharing your story. As older people we arrive in this place with our lives etched on our faces. Keeping our hearts and minds open is a wisdom we need to share. This story exemplifies a heart kept open.