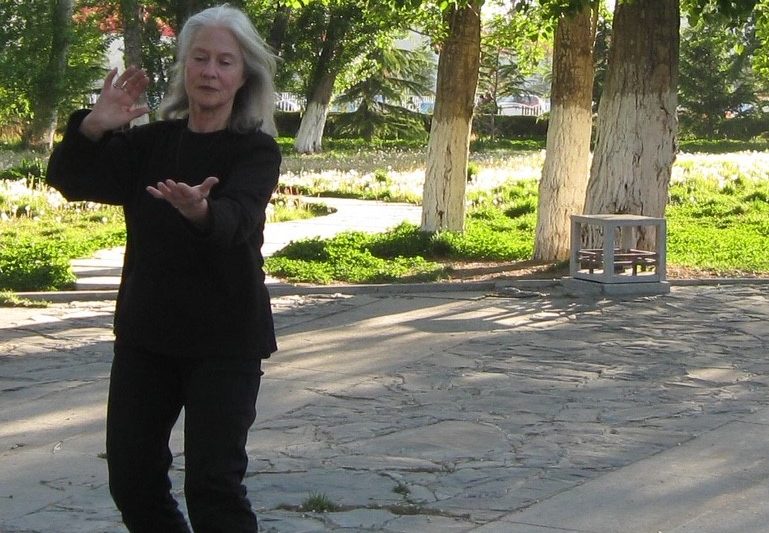 As many Viva 70 readers will know my mind has been rattling around the idea of how to do something useful in the area of climate activism when the last time I was politically active was in 1970’s around the Vietnam War! So apart from becoming a more diligent recycler, investing in a glass water bottle and buying the infamous red coat for my first demo in 40 + years, I’m reading and learning. But what else?

This seems a perfect time to ring a friend who has a passion for the environment in her DNA and she has been active in various related causes for many years. Geraldine has also practiced Tai Chi for a number of years. She’s a very calm, happy and interesting woman so I coax her into having a coffee and talking to me about her passion for  the environment and her life generally as a woman in these later years.

I meet Geraldine Ryan at a local café and her warm smile and sparkling eyes are enhanced by the vibrant green top she is wearing. She looks so damned healthy! I order a green tea…anti-oxidants! Geraldine is in her 70’s and a great role model of what positive ageing looks like. 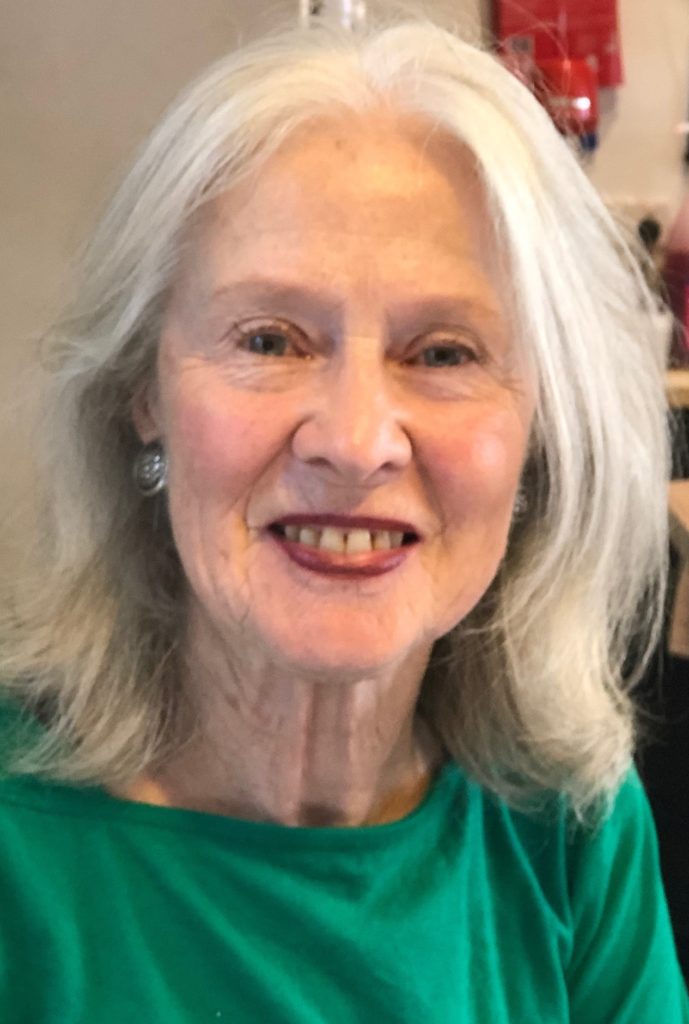 Geraldine grew up on a farm in country Victoria here in Australia. She describes a happy childhood with days spent roaming the paddocks with her cousins and friends. There were 6 cousins on the next farm and 10 kids, also cousins, at the neighbouring farm, so with bikes and ponies and on foot the kids lived an idyllic existence…… “It was a childhood spent walking the land,” says Geraldine. As long as they were home for dinner at 6pm, the world lay out on the land before them. This outdoor life and helping on the farm and in the home made her resilient and strong and she learned early in life how to get along with others and get things done.

I ask about the key influences in her life. What accounts for her passion for the natural environment? She describes her mother as a “gentle feminist” who valued education for her children because she was unable to complete her own education and always regretted it.   The farm needed her to work alongside her husband and this was the life that she had laid out before her. Geraldine recalls that for her mother there was, however, great joy in being self sufficient, creative in preserving various fruits, planting in the garden and listening to opera on the wireless.

Geraldine talks emotionally about her father’s absolute passion for the land. He would take the kids on to the veranda at night and they would watch the stars together. In later life he said, “If I had my time again I’d have planted a lot more trees.” Her father told stories of the “little hopping creatures” and native animals of his childhood, now gone from the land. These stories were written on her heart and a love of the land and wildlife became a thread woven into her life and passions.

Geraldine tells a deeply moving story of her father telling his children that he was going to apply superphosphate to the Wattle Paddock. Geraldine felt an intense pain for, having seen what had happened in other paddocks, she knew it would mean the end of the beautiful wild flowers and the wallaby and kangaroo grasses the sandy soil produced.

Like so many country kids at the time she moved to Melbourne to attend university and became a secondary school teacher. She taught English Literature and loved her work. She missed the land and her walks in nature and reclaiming this part of her life became important to her. At one school she formed a student group interested in rehabilitating the bush. It was highly successful and when Geraldine left the school employed someone to carry on this work. She started writing letters to politicians about forest protection and ran stalls to support various causes. In this way she met people involved in the environmental movement and started to learn about the work different groups were doing.

By the time Geraldine was in her 50’s she was committed to protecting forests and stopping the extinction of endangered species of birds and animals. Naturally a shy person, she talks about the fears she battled in attending different groups like the Wilderness Society, The Greens political party and Environment Victoria. She wanted to understand their charters and ways of operating and find a fit with her own values and a place where she could do useful work. “Finding a home” with the Wilderness Society, and a number of groups, Geraldine became an environmental activist doing everything from running stalls at music festivals , taking part in protests and lobbying for effective protection of land.

Geraldine is hands-on in her work and as part of the Victorian Malleefowl Recovery Group she spends some weekends working along scientists counting the birds in a given area, learning about their habitats and collecting data to help keep these birds flourishing in their threatened natural habitat. Writing submissions to politicians and attending seminars is an integral part of this work.

But Geraldine also practices what she talks about.

In 2004 she purchased 383 acres of forest and woodland in Western Victoria. It’s bushland of brown and desert stringybark trees, water holes and a shed  with two veranda’s so she can work under cover and sit and watch the animals and bird life in its natural habitat. Geraldine laughs as she tells me,” It was a passion decision. Not practical at all. It has no train to get there so I don’t know what I’ll do when I get too old to drive.” It’s also the home of the red-tailed black cockatoo which Geraldine is protecting by saving its habitat.

For me, a finely tuned city slicker it’s like entering a parallel universe. The English village with its manicured hedges still sits firmly as my point of reference in being “one with nature.” For Geraldine it’s a different world and it’s as though her environmental activism is a learned, considered love of the land and its creatures. The interest was embedded in childhood and never left. Her commitment is practical, quiet in its delivery and driven by a deeply held core values.

I ask her the famous 3 questions about ageing well.

Geraldine learns and teaches Tai Chi and this has become an integral part of her life. “It’s my second career” she says. At this age Geraldine says “I think that I also show up as my real self now. I don’t have to impress anyone or worry about fitting in. I’m a lot more at peace too. Probably more empathetic and not as judgmental.”

“Friends die and are gone forever. There’s grief and depression associated with this. It’s a shock when people of a similar age die. Oh, and I’m also slower at completing tasks. That’s annoying!” We both smile. “It’s important to visit people who have been your friends and mentors in the past and reconnect to say thank you. We don’t know what turns life will take as we get older.”

“I’ve taken a break from working with particular environmental groups and I’m thinking through what I want to work on next. It’s good to stop and evaluate where your efforts need to go. I want to do something but I don’t know what. My age is important and I want to use my age somehow but I haven’t worked it out yet.”

“Find some interests to give your life purpose. Look at what you loved when you were younger and create an interest based on these passions. Put yourself out there and learn new things. Keep on learning.”

“Exercise. Tai Chi is my way of staying fit, focused and being calm. I might have a whole list of things that I have to do that day but I mostly say yes to exercise first.”

Driving home is always my thinking time when thoughts coalesce and ideas take shape. My conversation with Geraldine was so warm – hearted and kind but also with a strength of commitment to the environment that is focused and unwavering. It’s so easy to adopt the persona of a conservationist or  climate activist because its a NOW thing…like we’ve just discovered it because we’re surrounded by bushfire smoke. But this is a different story. In a space of calm gentle learning and action Geraldine is a life long environmentalist. Her work is born out out of deeply held values and a love of the natural environment. In fact the word ” work” is probably wrong…… this is a mindset, a way of living and thinking that is her daily life. She also reaches out to influence the world around her on a political, educational and practical level.

I’m blessed to have spent the time with this remarkable woman and to hear her story. I can hear her voice now and see the red pen take umbrage with my words…” Oh Nora I’m not remarkable…..I’m just doing what I believe needs to be done….”