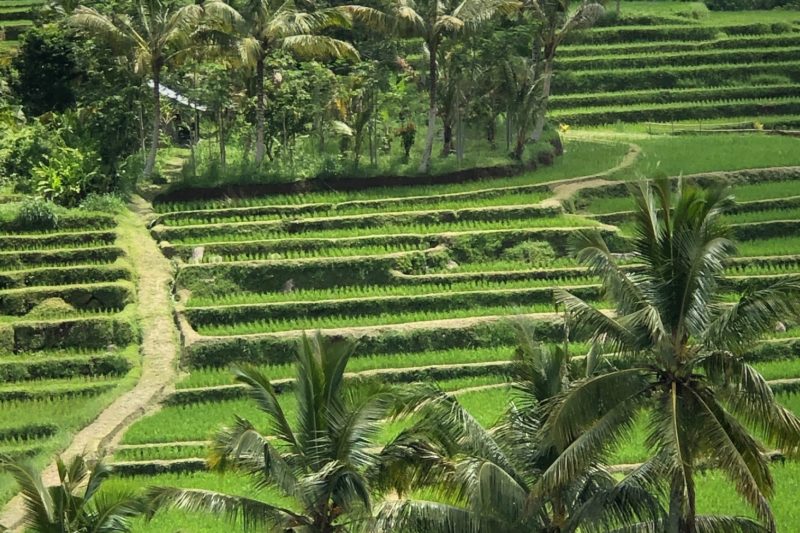 I’m in Bali and I’ve found the person who will be my driver for my 2 week stay. The first trip is to a local shopping mall. As he skillfully navigates the insane traffic with an air of quiet and calm he is warm and friendly without being too familiar. (Case in point he doesn’t say..”Where is your husband?”- an all too frequent question in this communally focused culture. Westerners get offended, yet it seems  a very normal question here in Bali. I always want to say..he’s a Russian spy and I can’t talk about it…!) But I don’t.

I have very clearly defined selection criteria for the driver I will entrust with my life in this traffic maelstrom.

No 1: Don’t kill me. There are motorbikes, cars, building materials carried on bicycles and chickens in bamboo containers riding side-saddle. Shirtless, tattooed westerners weave among the throng; helmet optional. “Beep and Go” is the only road rule in Bali. Dewa gets me to the Discovery Mall in Kuta in the comfortable, shiny black SUV. I feel like a princess. He laughs.

Rule no 2 for selection of my driver: Don’t hassle me for more work or tell me about your granny who needs new dentures, the children who can’t afford new Nikes or the crisis in the tourism industry. Ok I’m heartless but I’m on holiday and I don’t want to know.

Rule 3: Keep your fares reasonable…goes without saying… retired tourist and all that. Tick.

Rule 4: We can be quiet sometimes and have interesting conversations at other times as we drive along through villages and rice paddies. In this Dewa excels.

Dewa drives me to the Green School in Ubud. (see the story under LIFESTYLE 11/2/20) and as the miles roll by we talk- of family, life in Bali, the ordinary things. It’s nice.  As I so regularly find, human beings have stories to tell and insights that are interesting and I want to know more. …..and so we talk…lots!

Dewa Putra is 50 years old and married with 3 children. Two sons and a daughter. He has worked in hotels and now drives for the owner of the black SUV.  Like most Balinese he has lived here all his life, completed his education and also completed an English conversation course  to help with his driver role. His English is excellent and he smiles widely when I comment on his proficiency.  He agrees to be  “interviewed” but really it’s just good conversation as we drive along narrow village roads and share stories of our very different worlds. Like many Balinese I have spoken too he lives in two worlds. He and his family live close to Denpasar where the schools and work are. But his identity and extended family are in a village community about an hour from here. That’s where they return for festivals and family ceremonies. His father is a priest at the local temple and Dewa grew up in a world seeped in Hindu classics like the Mahabarata and Ramayana and the rituals of the temple.

He explains that the village owns the land which is leased to people on 20 year leases that can be renewed. Such a sensible system! It strikes me that in Australia we are so obsessed with home ownership. In Europe, UK and many other parts of the world a long -term lease provides security and renters can make negotiated changes to their apartment because it’s their home for the duration of the 20/30 or 99 year lease. He tells me about the way village life moderates and can control the behaviour of villagers. ” There are village rules” he says. “ In some villages you are not allowed to marry a partner from within the village. In most villages we must behave as good community members. The community is everything. The eldest child has to look after the parents in their old age.” I ask him what happens if people don’t abide by the rules of the village.  “They can take away your house or your land.” Nice! That’s aged care for you!

We talk about the impact of urbanisation and social media on generational change. All his children will go to university he says. He has been saving all his life for this. Something he and his wife could not do. Dewa talks about arranged marriages and love based marriages and I gently explore the basis of his own marriage. ” It was based on love. But of course when we marry it’s two families getting married. We say that my wife now has four parents, not two and so do I.”

He explains that the village community is the heart of his life. Each village has its own temple and each home its own shrine. As the conversation cycles through our hopes and dreams for our children, and the shape of our own lives at this time we go to a deeper level and it’s then that the human being inside the roles of career, husband and parent are revealed. It’s fascinating.

I ask Dewa the 3 standard questions for the 50 Faces: 50 Lives series.

What are the good things about being this age?

He beams, I love Balinese cooking and singing Holy songs….OK! Tell me more……He often cooks for celebrations in the village such as funerals and weddings. Suckling pig, rice dishes, chicken. It’s an honour to cook for other people. Do you cook at home? No my wife cooks everyday for the family. But Balinese men cook for special occasions.”

Suddenly Dewa breaks into song. There’s a  high pitched voice of Ramayana stories retold. A stillness in the car as we drive along. He sings at the temple and for celebrations. A beautiful voice and yet for me an unfamiliar tone and rhythm. A cultural gap that would take years of learning to fill.

What are the challenging things about being this age?

He looks confused…well he is only 50! He talks about the importance of keeping a positive perspective on life and living as a good person and the challenges in being a good parent and community member. We talk some more about where this comes from and the importance of religion and spirituality in Balinese life. I explain that for me as a Westerner, one of the things I like most about Bali is the fact that spirituality is so much a part of everyday life- from the daily offerings to the gods, the many festivals and the importance of the family and community. I want to understand why Balinese always seem so damned happy… and then I whince when the damned word  hurtles out of my mouth! He is unfazed.

Dewa explains that a community based society puts the focus on how a person can serve the community not a focus on individual happiness and self -actualisation (my words not his!) He talks of belief in karma as a navigating principle. He also talks about the misconception that Hinduism is a religion with multiple Gods. ” No, Hindus actually believe in one God. (Sang Hyang Widi) This God appears in many forms and in various places. It is in these different contexts that God appears under a different name- Vishnu, Shiva and Brahma.

For Dewa the challenge is not age related. It’s a life-long challenge to serve the community and ensure that he is a good person for this life and the next. Karma, remember!

It dawns on me that I need to do more cross cultural interviews to explore how mythology around ageing is culturally defined. 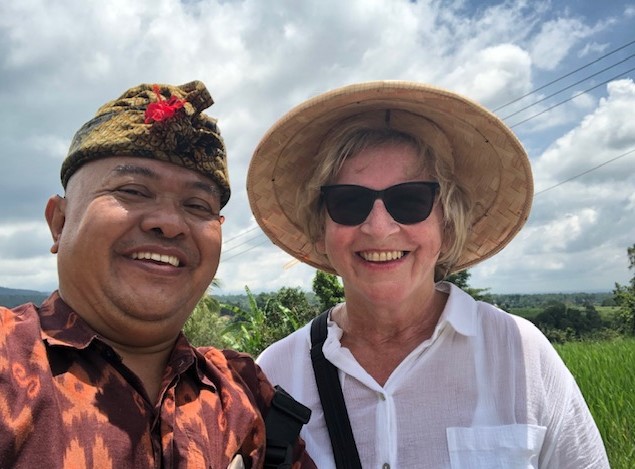 What are the things you still want to do in life..the bucket list?

Translating bucket list causes some difficulty and lots of laughter. Try explaining the idea of a grey nomad to a Balinese person! ” Well they buy a mobile home and tow it around Australia  as an adventure etc etc…” Again I bump into cultural differences. I try to explain that many westerners see their work as careerists and parents done when they retire and that they now feel free of such responsibilities. The bucket list being the wishes and dreams for adventures before they die. Holy cow! Try translating this one!

He looks confused and stunned. I try it from a different angle but only add to the confusion. Such a western, individualist, entitled concept! Even discounting the financial aspect of retirement, Balinese do not retire…they may downscale their work due to illness but this is translated into full time grandparenting or working in the family business. Dewa stresses that his role is to parent his children and be their moral guide until the day he dies.That is his most important role. Holiday translates as Balinese feast in the village and singing at the temple. Bucket list really has no translation.

I struggle on..” Well your father is a priest would you like to be a priest?” He laughs ” Oh no! I like beef. Priests can’t eat beef.” (Incidentally women can be priests in Balinese culture and many are)

What is the advice you have for others about ageing well?

“You is me. I am as you.” Dewa explains that in Bali this mantra is the challenge for all ages. Everything in life is interlinked. Translated it essentially means that we have to be good kind people and care for each other. The way I act will impact you and vica versa. This is ageless. And beautiful.

It’s been a privilege to spend these hours with Dewa walking rice fields and learning about another culture. Thank you.