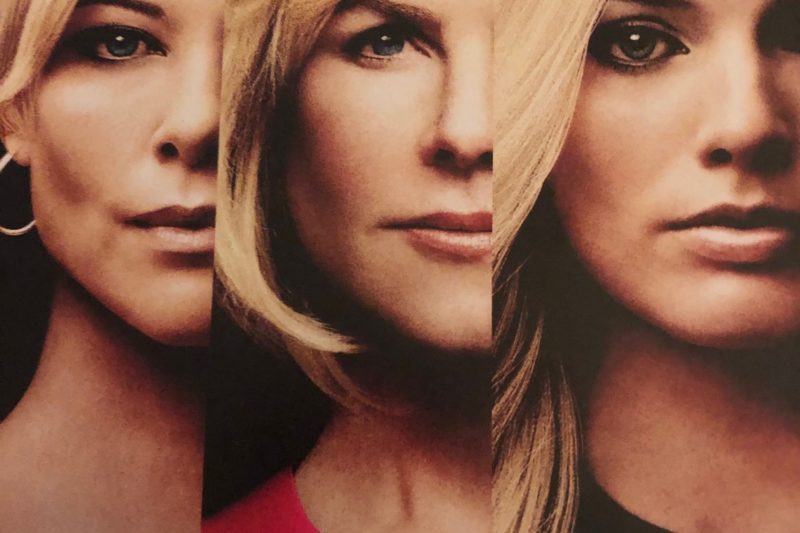 Director Jay Roach tackles sexual harassment in the workplace head-on in this powerful film. In the wake of the #MeToo movement this film is timely. It is also fastidious in working through the issues of workplace politics, power and gender through a compelling narrative that forms the basis of this film.

The setting is the Fox News empire owned by Rupert Murdoch and sons. Roger Ailes is the head of Fox News and the perpetrator of the sexual harassment in its various shades and forms. This role is superbly played by John Lithgow. Ailes is portrayed as a despicable man using his role and power over women to humiliate, conspire, threaten and cajole them into performing sexual favours.

Three women play a central role in the narrative. Charlize Theron is the super star prime time anchor. She’s tough, hardened, ambitious and has a lot to lose if she supports any action to out her boss as a sexual predator. She plays this role with conviction and strength.

Nicole Kidman plays the fading star just hanging on to her job as a middle aged woman in the youth defined media. She is repulsed by her bosses behaviour, loses her job and ultimately becomes the whistleblower that initiates legal action against Roger Ailes and Fox News. She stands alone with no support for a long time before other women come forward with #Me Too experiences.  Kidman plays the role well. She has the right amount of steel will wrapped in old school timidity that women don’t challenge, they endure. It’s a finally balanced role. The character is finally convinced to take a stand when she looks at her young daughters and knows that for their sake she needs to act.

And then there’s the character and performance that took my breath away. Margot Robbie plays the young starry eyed recruit, smart, savvy and eager to please. She is career focused and very soon she encounters what this takes in the sordid culture of Fox News. ” To get ahead  you have to give head.” is the mantra of the office of Roger Ailes.  There are deeply disturbing scenes where you see a young woman too scared to say ” No” to this powerful man. Robbie’s performance is utterly engaging and devastating. What fine acting.

More than anything this bold and demanding film shows the fine balances in why, only now, are women coming forward to report these crimes than have been taking place for years. And even now the proof of evidence lies with the victim not the perpetrator to prove their innocence. Tragically, ” she must have asked for it.” is still a softly spoken justification in many workplaces.

It’s a true story. Roger Ailes resigned from Fox News in 2016 after 23 women came forward to accuse him of sexual harassment in the workplace. He died in 2017.

It’s a tough film but a good film and very worth a look.