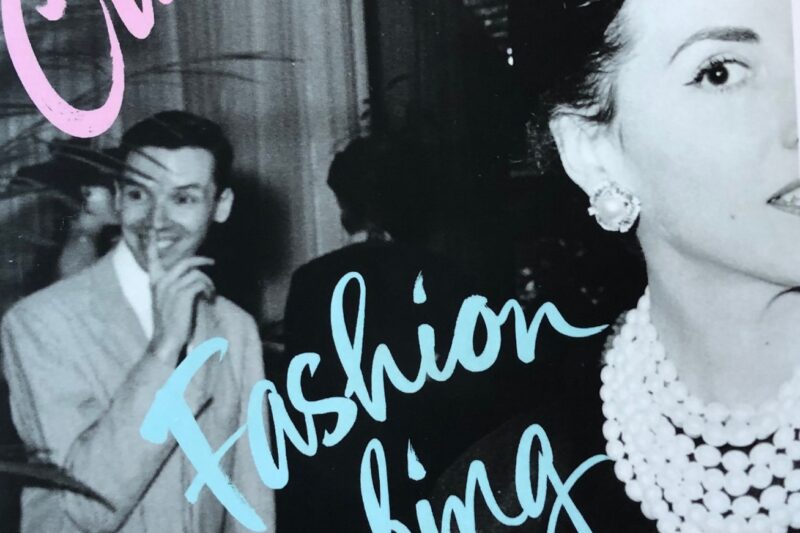 You don’t have to love fashion to love this book!

In 2010 Bill Cunningham New York hit the cinemas. In this documentary we were introduced to this unique, genial, creative, talented individual who rode around New York taking photos of fashion events, fashion on the street and in the homes of the fashion doyennes of this wonderful city. He’s an anachronism, spending his days in the world of glamour, wealth and fashion and yet living simply, owning very little and being his own man. Everyone knows Bill Cunningham and his work in New York and across the world. When Bill Cunningham arrived with his camera he needed no entry tickets to the Met Ball. He arrived on his bicycle, took outstanding photos, chats to the rich and famous and then left.

Last week, a little book  Bill Cunningham’s Fashion Climbing: A New York Life, arrived in my pile of online purchases from my favourite bookshop. The book is as unassuming as the man. I expected a rehash of much of the material in the documentary but this book delivers so much more. It’s a warm and engaging story of a man who lived his own way as a creative individual in a world obsessed by power and fitting in. It’s a wonderful tale of the human spirit, persistence, cheeky enterprise and a happy story. His life story is so unpredictable and his positive attitude endearing and a lesson to us all. Let me take you into some of the pages……..it’s worth a wander…….

The book begins…. My first remembrance of fashion was the day my mother caught me parading around our middle-class Catholic home in a lace-curtain Irish suburb of Boston. There was I, four years old, decked out in my sisters prettiest dress. Women’s clothes were always more stimulating to my imagination. That summer day in 1933, as my back was pinned to the dining room wall, my eyes splattering tears all over the pink organdy full skirted dress, my mother beat the hell out of me, and threatened every bone in my uninhibited body if I wore girls’ clothes again.

No matter how hard his parents tried to distract their errant son with boys pursuits and schooling Bill lived in a world of his own where fashion and style called to him. At church he would be entranced by the hats Bostonian well – heeled women wore and their Sunday best clothes. In his room Bill would for days build theatrical stage sets and costumes. Soap operas on the radio gave this imaginative child the spark to design the dresses these voices would be wearing. In the preface to the book Hilton Als says – As a preternaturally cheerful person Bill seemed not to ever feel alone- after all he had himself. It’s this self sufficiency fuelled by a powerful imagination that made Bill Cunningham the intriguing, charming person he was. (He died in 2016 of a stroke)

My family had a whispering thought that I’d be a priest. And all this attraction to feminine fashion didn’t help their hope. But what Irish Catholic family didn’t dream of their eldest son being a priest. I always knew I wasn’t priesthood material as I was sewing away from some devilish fire, flaming inside the deepest corners of my soul.

At twelve and into his early teenage years, Bill was earning pocket money clearing snow, delivering papers and delivering clothes for Mr Kaplan the local tailor. With money earned he bought fashion magazines. The family were in a state of frenzy and decided Trade School was where he was headed and it would knock the artistic nature out of me. But Bill was unstoppable and made spindle leg tables with curlicues and twists. Irish Baroque I think you’d call them !

After school was over for the day he worked at Jordan Marsh department store as a stock- boy in the ready to wear department. Heaven. As the years went by he became more flamboyant with his ties and colourful shirts. He spent three years in the fashion department and a new department store was opening its doors in Boston and hired Bill as the stock-boy for designer clothes such as Dior. The grand salon invited Bostonian dames and Bill saw close up the power of fashion. At 18 the store sent him to New York for a training program in their fifth avenue store. His life was never the same again but he was due to return to his Bostonian family and take up a position at Harvard, the ivy league University. The classes at Harvard were like being in prison and I nearly drove my family mad begging them to let me return to New York. He did return there in 1948 to a job at the Bonwits department store and a roof over his head at a wealthy aunt and uncle’s brownstone. But the dream of being a fashion designer was still at odds with a wealthy middle class family where medicine or the law were the only options.

But his new life gave him access to the fashion world. He would gate -crash society events and hide behind curtains to observe New York society. He was asked to make fancy headdresses to go with the ball gowns he sold at Bonwits which then lead to making hats and soon he  established a millinery shop of his own. Rental was $50 a month but he agreed to clean other rental properties for the owner so he paid reduced rent on his new shop. His first press collection of 50 hats was in July 1949. But times were tough and one weekend he had nothing to eat but a tin of Ovaltine because he’d spent all the money on materials, feathers and netting. His bicycle was the only way to get around.

All this would change when in May 1950 when he was called up into the army! At first I was heartbroken but then I always believed good would come from any situation. I might get stationed in Paris and the idea of going to Paris and looking in on the fashion there sent me into orbit!

From the first day in army camp I had two years of a wonderful broadening experience. During basic training I was the star of camouflage manoeuvers. My helmet was always covered with a dazzling garden of flowers and grasses much to the exasperated rantings of my senior officer who screamed that I looked like the garden of Eden while sneaking up on the enemy.

During this period he kept studying French but when the training ended the options were posting to Korea or Germany and his papers ordered him to go to Germany. But this is Bill Cunningham and he was only there for 2 days before he was ordered to go to France to help support the French in their post war clean up and rebuild. Digging latrines by day and drinking at night was the soldiers life. Bill suggested taking some of the soldiers on short tours around the country when they had a day off. Within weeks he was given the OK to start a tour department. Forty soldiers at a time where hauled onto a bus for a weekend tour led by Bill Cunningham. Many nights spent at the Folies Bergere among those glorious costumes! This was followed by Ski weekends and historical tours, Then the commanding officer’s wife heard Bill made hats so he was asked to set up a millinery course for the wives . It was here he made Extra Hats and then headed to Paris on his free weekends to show them to the fashion houses.

This is just a smattering of the story of the amazing adventures of Bill Cunningham. He was an extraordinary talent and the type of human being we would love to know. His story continues as he climbs the fashion ladder in Paris and New York and after many other adventures becomes a leading fashion photographer and commentator. But he never forgets this world of fashion is hocus pocus fantasy and surrealism. He finally says

Let’s hope that the fashion world never stops creating for those few who stimulate the creative designers, and on wearing their flights of fancy bring fashion into living art.

Words by Nora Vitins Photographs with thanks Wikipedia.

Fashion Climbing: A NewYork Life by Bill Cunningham is printed by Chatto and Windus London 2018