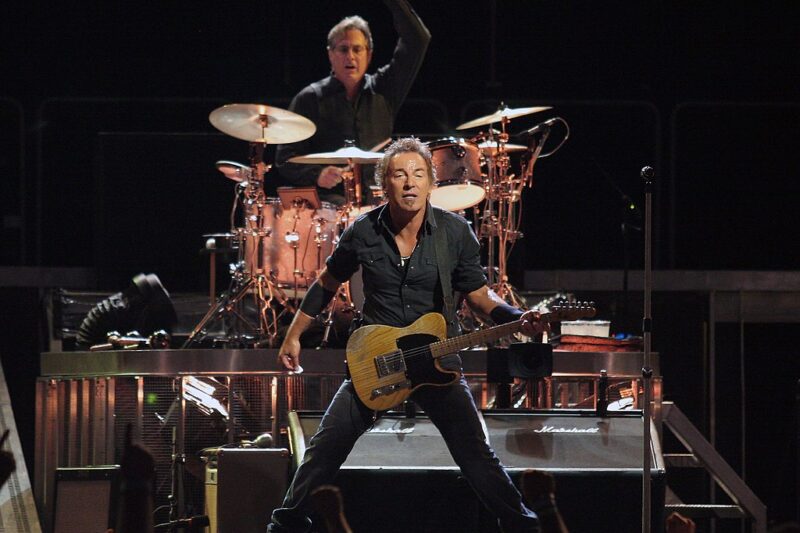 For many of us the pandemic meant a new dress code.. Flannelette in winter, cotton in summer..Pj’s of course. Then there were the openings… ‘fridg door mainly and the ” esoteric” hairstyles..long and longer. But some creative people actually created amazing music, painting, writing. Bruce Springsteen looks like he spent a lot of time in the gym and then there’s the new 12 track album and a documentary shot with the E-street band. Now that’s a productive pandemic! Oh and the album hit no 1 in the Billboard best seller list. (The last time he hit no 1 was in 2002 with ” The Rising.”) And yes he’s 71 years old and rather nice.

So why all the fuss.?

For Springsteen and the E street band it’s a return to the signature Springsteen rock songs that travel so well in stadium around the world…80,000 people singing and toe-tapping to I’m Alive..an anthem by any other name. …….. but only in my imagination. There are no concerts and no gathering of loyal fans so creative people create alternatives.

The album is called Letter to You and it’s a compilation of reflections about friends dying, (Last Man Standing) fragility, friendship (One Minute You’re Here) but its essentially a hard rockin’ celebration of life. (Ghosts There’s frequent reference to spiritual/ religious motif and imagery that echoes Springsteen’s concert narrative…that concerts bring people together to sing, dream and be in communion through song..perhaps there are the stray thoughts of an Irish catholic upbringing too. (If I was a priest / The power of Prayer)

With no concert diary, the album is explored through a documentary called Letter to You and available in Oz on Apple TV+ Springsteen brings together the E street band for 5 days of recording at his studio barn in New Jersey. The doc is directed by Thom Zimney and it’s brilliant. I’ve looked at the documentary 3 times now. It’s like seeing a kaleidoscope. The first time I saw the beauty of  the cinematography- the snow falling in the countryside, the treetop shots around Springsteen’s farm but also a rather stiff contrived relationship between band members with The Boss firmly in charge.

On the second viewing the music came to life and it became a substitute for a concert video. The rhythm, lyrics and THE WORK glowed brightly and the talent of this group of musicians was obvious.

On my final viewing I knew the songs, appreciated their storytelling and then found more. Letter to You is a meditation, a reflection of a group of professional friends..older people who have lived a large part of their lives together. There’s no chatter. There’s quiet contemplation around the work and some celebratory shots for a good day’s work. There is an older Springsteen reflecting on his past and that of his fellow travellers. There’s no Rock God but an older man, a little weary but with things to say and an authenticity that glows bright. It’s beautiful to witness and an intimacy of thought and emotion shared with his audience.

I think also of the wonderful concert by Nick Cave this year- Nick Cave Alone at the Alexandra Palace. It seems the pandemic has helped produce some outstanding musicianship and a thoughtful, quiet intimacy shared by these talented people.

I hope everything is going well for you  and life is great. I’m taking some time out of Viva70 after a more than three and a half years of scribbling. Life is busy and in transition. After living in the country for more than 50 years I’m thinking about making a move to city living.  Some days it’s an overwhelming idea. Sometimes a little daunting, and most days…let’s just make it happen  now! Of course I choose to try and sell in a depressed property market but if I don’t try….I’ll never know if this was the time for change.

Will Viva70 continue? I’m not sure. What I do know is that I’m sincerely thankful to all the wonderful friends who have travelled with me through these pages and supported my writing. My love to you all.