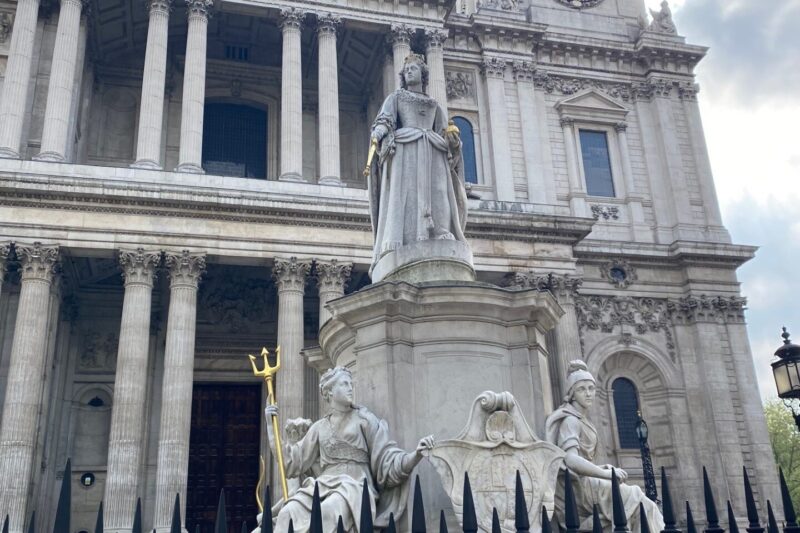 ” Great things never come from comfort zones.” is one of those quotes that drop out of the air when I want to justify spending a lot of money or doing something wild! Well in London, solo travelling at the age of 72, the wild may have toned down a bit, but the spending of money is a fine art that I have mastered. Britain is heading for 9% inflation this year but the media still seems to be stuck on- Did Boris throw parties during London’s  Covid lockdown and what is the definition of a party?! If people bring their own wine is that a party?……..But I digress…..

I paid $11 for a cup of coffee last weekend – admittedly in the poshest part of London, so lesson 1 from this trip is – travel ain’t cheap but the memories created are priceless…. another cliche to steer me through!

When, in a few weeks time, I’m sitting in my home in Daylesford in mid-winter watching the mists roll in, I’ll remember last weekend in London for it was magical!

On Saturday I set off to the Tate Modern which is one of my favourite galleries.  I’ve mastered the spaghetti – like underground “tube” and worked out how to get to St Paul’s, which is close to the gallery. The only people wearing masks on the train were clearly tourists. There were a few sleepy workers gloomily heading off to do their shift. The doors opened and in stepped a flurry of young people dressed like Ralph Lauren models heading to a race meeting or wedding- all fascinators, heels and pretty dresses. It’s 16 degrees…. summer temperatures for Brits. Men in their pastel linen jackets and brightly coloured pants..Like Michael Portillo on those railway travel programs.. British men really dress like he does! The energy in the train carriage lifted with their excitement. The train whooshed along the lines, came to a screeching stop and like feathers released to the wind they were gone.

I emerged from the tube station just as the sun shone on the huge dome of St Paul’s. I’ve seen it before. I’ve seen photos of it. St Paul’s is a photograph imprinted on  our minds. A cultural icon for us Brit. kids. But there’s something about it’s scale that creates awe and wonder and on this gentle day it was magical.

I  asked an older man with a peaked cap for directions and out came a lovely cockney accent.. ” well Darlin’ it’s like this…”  Close my eyes and I’d be talking to Michael Caine… As I walked over the Millennium bridge I thought about how lovely this  “Darlin’ “made me feel. There was no sleeze just a genuine kindness.. I hope we never  lose this in a world of political correctness.

As I walked up to the gallery I saw this sign..so very British!

Tate Modern is an old power station. Its scale is massive. I didn’t have a clue what was showing, but I was ecstatic when I saw “Surrealism Beyond Borders.” I hadn’t booked and my phone wouldn’t scan the code so they sent this old lady to the desk. There was one ticket left for the exhibition that day and it was starting in 10 minutes time.. Ok this is beyond lucky!

The exhibition was outstanding. Magritte, Picasso but also Surrealist painters from Mozambique and Asia. It was beautifully curated so you could understand the development of the surrealist movement in different cultures. Room after room of amazing canvases, photographs and film clips of the artists and their lives. Breath – taking, powerful, funny, puzzling, rich, and sometimes emotionally demanding of the viewer. I was in heaven.. what a collection! I’ll write an article looking at the exhibition once I’m at home.. on one of those misty winter days.

I sailed back over the Millennium Bridge and saw a rather elegant looking restaurant near the tube station. Haz is an upmarket Turkish restaurant with white linen tablecloths, elegant interiors and attentive waiters… time for a treat! The meal was sensational. Little dishes of dips, lamb, salads, breads, chicken and grain salad with flavours of mint, pomegranite, lemon and garlic. I tried a light Turkish wine which was sensational.

A few tables away from me a business lunch was taking place. 40 something men in smart casual, met other 40 something men with US accents. The four sat down to lunch and oiled the conversation with a couple of bottles of wine. This time I was an observer of this Saturday  lunch where  business relationships were massaged as the basis for deals to be made during the week. There was a moment of reminiscence. I know this place. Leaving your families on a Saturday because American partners or potential clients were in town. I remember the corporate lunches and schmoozing- most of it tedious. Some of it fun..but it was work, just work and I loved the fact that I could observe the well -worn script play out in front of me, while I could simply watch, and in my own bubble, enjoy this wonderful meal.  The bill was $90 which wasn’t that bad given I had eaten for England!

The next day, Sunday I decided to go to church! I love choirs and big beautiful churches with all the rich stained glass windows. I shook the creases out of my one good jacket that I had bought to London and headed off to Sloane Square where there is a beautiful Arts and Crafts style church with a service at 11am. It’s a sung Eucharist which sounded Ok, not being familiar with the term Eucharist but ” sung” sounded good. Things started to go wrong when a number of Rolls- Royces pulled up outside the church and disgorged designer -clad children and their parents. Among the throng was a baby swathed in a mammoth Christening gown so it looked like an embalmed mummy. The throng sat at the front of the church and air kissed as more of the family gathered for the Christening.

Other signs that this was a bad idea soon followed. The golden robes of the clergy in procession looked grand until one of them swung the sensor containing pungent incense over the congregation. Whenever there was an Amen- and there were a lot of them, the  incense created a thick fog that left me gasping for air.. a little too much incense perhaps.. he didn’t read the bottle! Then there was the fact that everything was sung… pages and pages of standing up, kneeling down, gasping for air and singing. A gym membership would be less painful. The text also made it clear that we were all sinners and needed forgiveness ,which was a bit rich given the amount of exercise we were doing in difficult circumstances.

After an hour of this it was time for the baby to be named. Godparents and parents gathered at the altar and then did a circuit of the church to the font at the back and then back to the  front bit again. The child had a name so long that it felt like another hour for it to be baptised.  The poor little thing gave out a gut wrenching scream as the water soaked into the the acres of lace it wore. Among the baby’s names, which included Henrietta, Charlotte, Mary etc… right at the end of the names list, just as the vicar was scrambling for air was another name…. this baby with 5 traditional names was also called…..Scout!!!! 5 names plus Scout Fitzgibbon – Henry… Scout!!!! It must have been the incense but I burst out laughing… all a bit 4 Weddings and a Funeral for me!! The man in front of me turned and glared and I decided it was time to leave… I feined a coughing fit and everyone was happy to see me leave the church. Outside the chauffeurs huddled, chatting in the spring sunshine. The Ferraris in Sloan Square roared aggressively as they competed for parking space and I decided I needed a strong coffee. That’s when I found myself paying $11 for a single origin, free trade, left side of the hill coffee.

As I looked at the monied madness around me I just smiled at the church experience I’d just had. I smiled at the fact that I have enough to be able to come here to London and pay $11 for a coffee. I smiled that without any planning, these crazy adventures seem to fall at my feet. I smiled that I am fit and well enough to be here and that when I’m ready, I’ll go back to another country I love, Australia.

Words and images by Nora Vitins