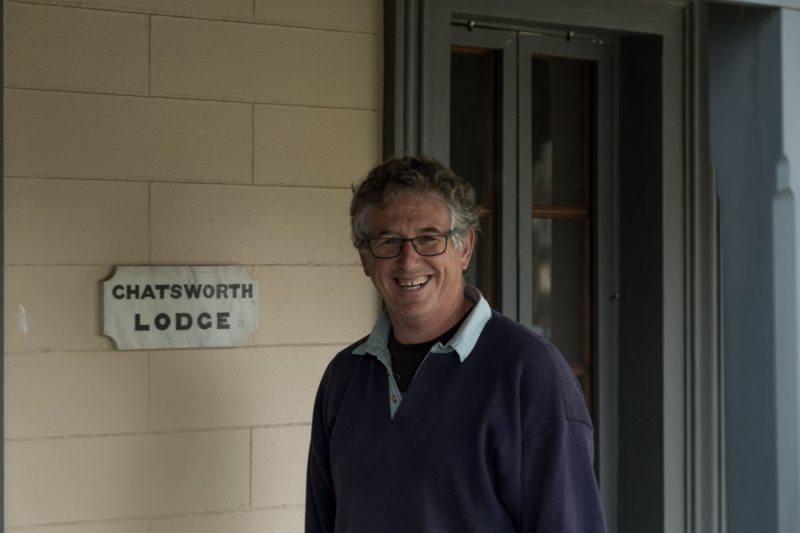 Last week we enjoyed the story of Chris O’Connor’s “Gap Year” and the life change that followed. Moving from New South Wales to Chatsworth Lodge, a Victorian heritage listed cottage with grand plans to restore the beautiful old home, sympathetically add to it and build a new cottage on the property for his parents…some gap year! We join him and the family on the next stage of this “retirement” adventure…………

It’s late on a hot January afternoon in 2016 and we’ve been sitting in the cab of the hire truck, full of our belongings and furniture, for about 9 hours. We’re making our way down the inland highways from central New South Wales to our new home in the Victorian Goldfields. We will do two more long trips up and down these highways over the next couple of days.  As usual, we (or if I’m honest, I) decided it would be cheaper and no big deal to do the moving ourselves. This decision would turn out to be a real pain in the butt.

After drawing up various plans for the new building work, and needing a good set of drawings to help me self -build, it became obvious that we would need professional help to get the project off the ground. Therefore, we now had an architect. We had an initial meeting with Stephen before Christmas to set out our wish-list, what we could afford and how we would achieve these things whilst maintaining the historic integrity of Chatsworth Lodge. 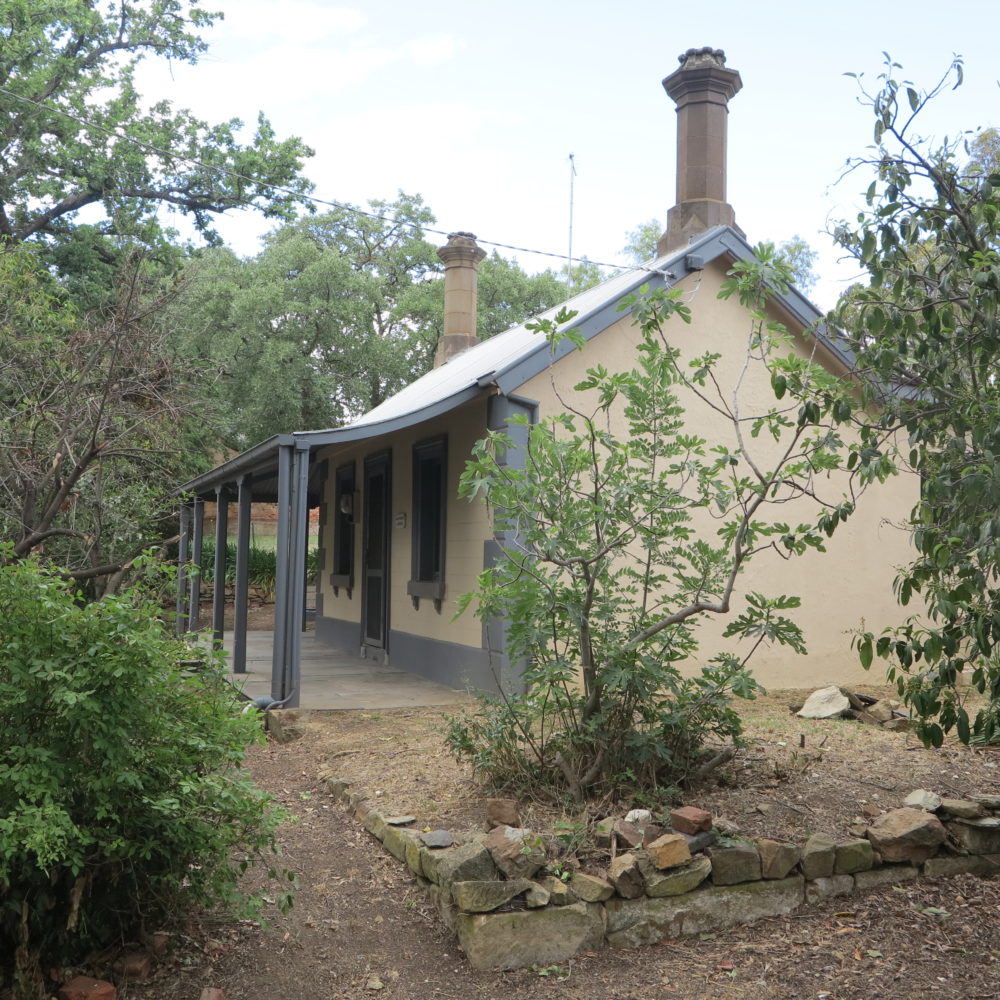 Stephen would come back with a concept and preliminary drawings and he was happy to help steer us through the mine field of red tape, councils and government departments. One thing that did become apparent, however, was that it was not going to be something that would be done in a few weeks. Lucky I was having a gap year!

Before purchase of the cottage I had contact with Heritage Victoria to make sure there were no major issues with any proposed building work. Several phone conversations with the heritage officer took place. He assured us that he knew the property and could see no major problems with the vision I had outlined (kind of). So we jumped in the deep end.

On that first night in January as we lay in bed listening to the traffic buzz (yes the cottage is on a main road), we knew two things. The first thing was that the planning process was going to take some time. It was not going to be a quick or simple process! The second thing we now knew was that we needed to get ear plugs!

But we were undeterred. I was having the gap year I had never had and there was plenty to do with setting up our new home. As the cottage was small, with little spare storage space, we would spend the next few weeks running furniture and boxes down to Melbourne to be stored. As well, the gardens were somewhat overgrown and neglected and we were both looking forward to getting our hands dirty. We launched into the to-do list with enthusiasm and vigour.

It was 2am on a Sunday morning some weeks later when I woke in what I can only describe as the worst pain I had ever felt. It was as if I was being stabbed in the lower back and right leg. Lying prostrate on the hard wooden floor was the only place I could find relief. By 7am I was in the local hospital with Sandra by my side. I had developed a bulging disc and a bad case of sciatica.

The long days in the truck, the drives to Melbourne and the furniture moving had taken its toll. I was to spend the next two months laid up on the lounge, being hand fed and going slowly crazy, thanks to a cocktail of Valium, Oxycontin and Endone. The building work was on hold! It would take another two months, with visits to the physiotherapist, the local swimming pool and the psychologist, before I could throw away the walking stick and confidently believe that the project was still on.

It was now the middle of the year, 2016. The plans were delivered by the architect and were   on their way to Heritage Victoria for approval. On Stephen’s advice, we engaged a heritage consultant to prepare a report, outlining how the new work would not have a negative impact on the existing cottage. This involved unforeseen expense, but it made sense. Consultation with Heritage Victoria resulted in a change in the plans. The extension, to be built to the side of the cottage and attached by a glass link-way, was to be moved further back so that the cottage retained its original street character. We received our heritage approval in May 2017!

But there was more to the planning process. Next we had to submit the plans to council for their approval. This would involve more reports (bushfire/engineering/energy ratings/road impact etc.) and more meetings and phone calls. Nothing seemed simple when dealing with the bureaucracy. But by August 2017 we had our building approval from council! One more step forward.

However, we still didn’t have our building permit. This would involve engaging quantity surveyors who would issue the building permit. Again we had to submit all documentation already provided to Heritage Victoria and the council, so that they could re-ask all the same questions. It felt like ground hog day!

Finally, in November 2017, almost 2 years after we purchased the cottage, we had our building permit. By the end of that month we had turned the first sod of dirt.

Now that my back problems were hopefully behind me, I could start to get my hands dirty.

It was the beginning of year three of my gap year! 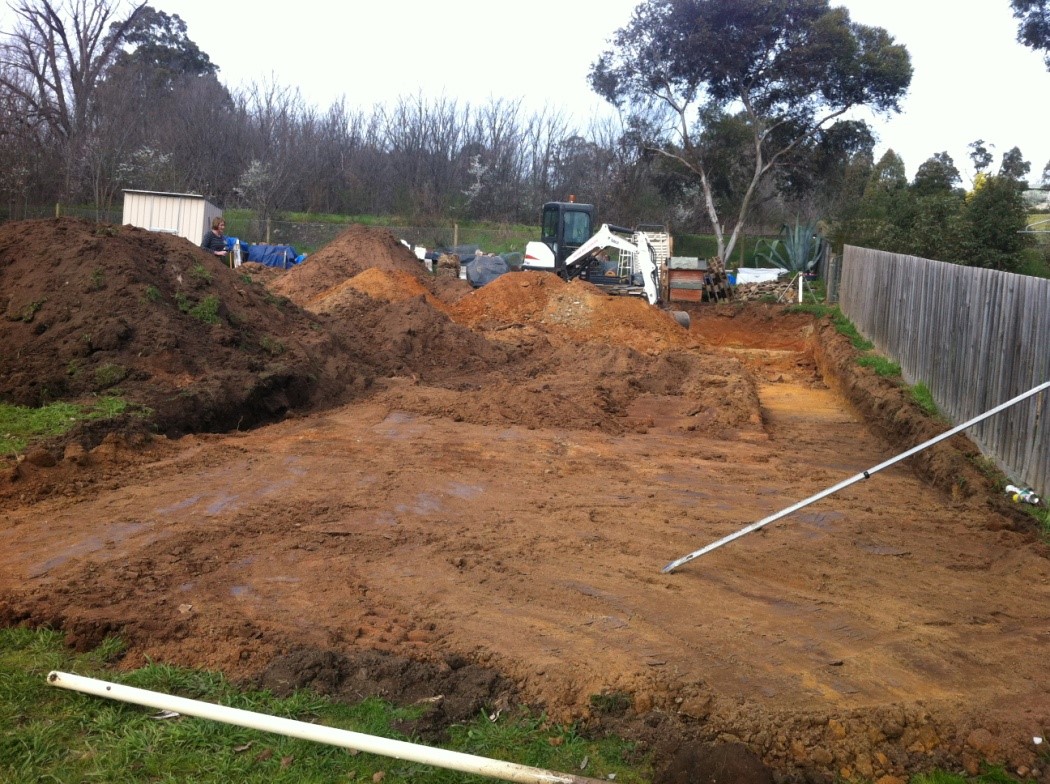