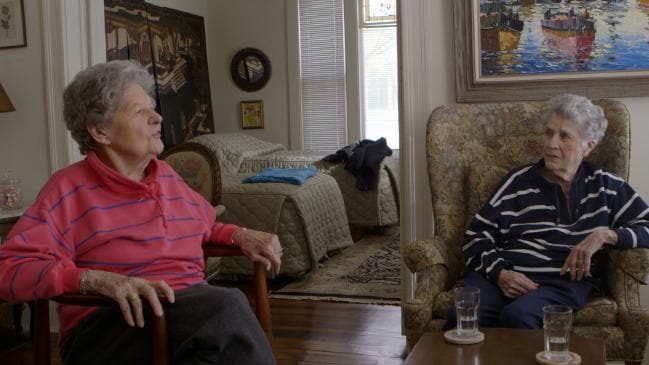 Netflix is really a cornucopia of trash and also some excellent programming. A Secret Love is one of those little, unassuming gems that tells a very simple human story of a lesbian couple, their 65 and a half years together and their move to an aged care facility. Being gay in 1940’s was a very different proposition to the way  we view same sex relationships in this century. It’s a documentary of hidden love, triumph of the human spirit, family dynamics and the ultimate fate we all face. It’s a story beautiful in its simplicity and “ordinariness” and one we can identify with.

Originally from Canada, Pat Henschel and  Terry Donahue met in 1947 when Pat was 18 and Terry was aged 22. Terry played on a female baseball team which in itself was unusual for the times. There began their relationship secreted from public and family view. They worked in the same interior design company and the relationship flourished in secret.  Together they moved to the USA thinking their relationship would be less in view in a bigger city than Mooseville, Canada. But its the 1940’s and women can be imprisoned for “impersonating a man” if they wore less than 3 items of feminine clothing! So they were “flatmates”, had separate beds and presented to the world as just good friends who shared accommodation because it was budget conscious. This was the story accepted by their families for 65 years. Photographs of the young, vibrant Terry and Pat are interspersed in the documentary, travelling together, at parties,  and living a full and rich life together. Diana, Terry’s niece is a part of their lives and makes regular visits from Canada to see her adored aunt.

In their 80’s when Terry has Parkinson’s disease and Pat also has health issues, it’s clear that staying in their much loved house of 27 years is no longer viable. Diana arrives from Canada, full of missionary zeal to get the pair organised, packed up and moved into an aged care facility. Tension and conflict arise between a well meaning but very self needy Diana and Pat, who resists moving house and puts up any number of reasons why they should not move. Anyone who has been through the process of  moving a parent or loved one into aged care will identify with the trauma of this move- for the parent but also for the son or daughter who take on this role. It’s heart breaking to make choices about treasured memorabilia that needs to be discarded, and lives packed into boxes. Terry and Pat find love poems that they had written to each other in their youth but the signatures are torn off..in case anyone should find out that they were a couple.

But they do make the move into the aged care facility and it is there that they decide, after 65 years together to get married surrounded by family and friends. “I carry your heart in my heart.” They also make another move back to Canada to be closer to family where they lived until Terry’s death in 2019. Pat continues to live in the aged care home in Canada. They were together for 72 years.

The 82 minute documentary by Chris Bolan is sensitive, funny, poignant and deeply moving. It’s a story of love and also an exploration of ageing and end of life plans set against the backdrop of a relationship that was secret for so many years. A fine piece of storytelling and worth a look.