Do you ever have that feeling that you are definitely not part of the human race? An alien perhaps? Or at a minimum lacking some basic human responses? I do. Like my brain reacts to what others say is ” lovely” or ” heartwarming” by feeling irritated and nauseous!

I saw Tom Hanks interviewed on Graeme Norton’s show. I’ve always thought Hanks a fine actor and for all intents a nice human being. So I trotted to the cinema, latte in hand and fighting the urge for a salted caramel ice-cream. It was a choice between Oscar nominated 1917, a film about war or Hanks new film, A Beautiful Day in the Neighborhood.  I’m in a gentle mood and war movies always leave me sad and upset so I opted for A Beautiful Day……. 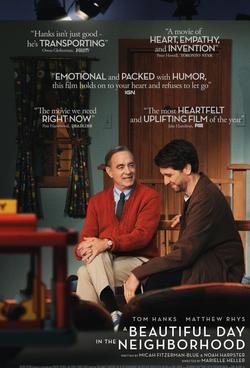 The film has grossed $60.7m so far in USA. When I left the cinema in the dark as the credits were rolling a woman walked alongside  me..  “I have to get to the toilet, but what a wonderful story.. such a great man….” she said. That’s when the  ” I’m an alien” feeling came back……

So here goes….This film is awful…..in my humble opinion. There is nothing beautiful about it!

Story? Based on a true 1960’s Childrens’ TV program presenter, who apparently was a church minister too- although that is not made clear in the film. Hanks character, Fred Rogers is an always positive, always listening, always affirming TV host. Key messages- you are just fine as you are- people behave badly because they are hurt or angry and we need to help them be happy.- we have to love each other and God is always there to help. We all need to forgive. This man plays the piano with his wife- (each has  their own piano in the same room), he prays for  people he meets and speaks very slowly and always with a smile on his face. No problem with the religious stuff but this man is creepy! He decries the hero label but he acts like a wannabe saint. There’s a scene on public transport where he is recognised and the whole subway train sing the signature song to the children’s program. It’s sickening.

But every film needs tension and angst. A counterpoint to this super human nice guy. Lloyd Vogel is a cranky, unshaven investigative journalist who is annoyed at given a ” puff” piece of 400 words on Mr Nice guy. Vogel hates his drunken father, is self absorbed, treats his new son and wife with indifference and generally is not nice. The morality tale comes when nice guy meets mean, angry guy for a series of interviews. Nice guy acts as therapist and empathic human being and helps Mean Man journalist to like his dad, forgive, stop being so angry and connect with his wife and baby. And we have to sit and watch this snail paced piece of sugary parable.

Ok I could have left but I had HOPE in my handbag and my heart and I try always to stick it out. But there must be something endearing about this film? Nope! Sorry. I feel like Mean Girl now.