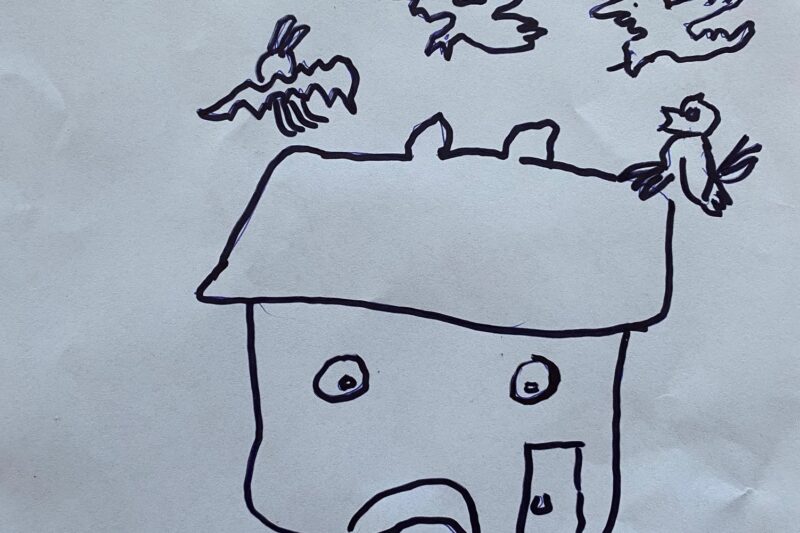 In the series 50 Faces 50 Lives this article published in June last year generated a large number of comments and conversation in our Viva community. Old age can be tough when illness strikes. My story about David living with dementia touched a nerve and it will be an important part of my slowly being written book about stories of ageing and living well.

A guiding principle of The Good Life is to have purpose, live fully and make each day count. Viva 70 was created to shine a spotlight on this idea for people over 50 and heading into their years of Elderhood. But what if you approach your later years living with a serious illness that compromises your ability to live fully……. an illness that has no cure and makes you reliant on others for even the most basic needs?

We have a family member who has dementia. He’s 83 years old and has been living with this illness for the past 6 years. His name is Dr David Potts or as he tells everyone Dr Potts of Gold. I first raised the idea of writing this article, an interview with David well over a year ago. He was very interested but told me that he would have to read the draft to check if I was using active tense in my writing and also check the accuracy of the dates! David’s life was spent as a historian and academic. He was my history lecturer at university. His memory may be broken but he seems to remember my sloppy footnoting and delinquent disregard of historical facts!

Since then we have had many conversations about his life and what it’s like to live with dementia. His conversations are now narrowed into only a few filing cabinets of his brain where he pulls out a well worn story. But on a good day this once energetic and vibrant human being is funny, eccentric, inquisitive, creative and kind. On a bad day he’s overwhelmed, exhausted and scrambling to fill scraps of paper with notes about anything anyone says, to try and remember even the most inane detail of life. He’s scrambling to grasp some small shred of control and mastery over a crumbling world that is more threatening and dark every day.

I think its important to tell the stories of people like David for whom older age is not about relaxing after a busy lifetime of working and parenting. One in 10 people in Australia over the age of 65 have Dementia. (1 in 3 over 85 have dementia) Every day another 250 Australians are diagnosed with dementia and it is the second leading cause of death in Australians.

We catch up one gentle autumn day and sit in his leafy garden in the suburbs surrounded by giant eucalypts, birds and the feel of Australian bushland. He’s having a good day. He greets me with the familiar ” Nora, Flora Oh Begorrah!”

His long term memory still holds the stories of the past and he’s a natural story teller. He tells of growing up with his sister and father as his mother died of TB when he was only a baby. His father valued life experience over material possessions and David and his sister were taught to be social activists and environmentalists since the 1940’s. David always was grateful for the richly textured upbringing that he had. David went to Australia’s first alternative school, Koornang nestled in native bush land by the river in Warrandyte. He tells stories of his art teacher, Danila Vasilieff, a now famous Russian born artist who would swim in the icy river mid winter. He taught David to draw the Australian bushland around him with its kookaburras and wombats. It was the start of his passion for native plants and wildlife. Years later David bought 16 acres of land on the river just a short distance from this original school site. There he would build a mudbrick house and dream of a community of people living on the land. Conservation became a way of life.

When Koornang closed David’s education continued at Preshil, a school with a similar child- centred, alternative schooling philosophy. David’s talent for writing and illustration continued to blossom. Years later family and friends were always treated to David’s hand-drawn Christmas cards of intricate bush scenes. In his last years of schooling David became a pupil at Trinity Grammar School. Ever adaptive, he donned his first ever school uniform and remembers being intrigued by all the ceremonies, rules, parades and pomp of a private, very establishment school. In the next years Melbourne University and extensive overseas travel featured. He ventured on the hippie trail via India to London but also danced rock and roll in Kenya, spent time at the famous Summerhill school in UK, and learned Transactional Analysis and Deep listening as a learning technique in USA.  David’s passion however was teaching and bringing alternative learning and teaching techniques into a very staid sandstone institution. He became an academic at Melbourne University.

In 1967 he was given an offer he couldn’t refuse. La Trobe university was in its foundation year and David was offered a free trip to Mexico for 3 months if he came to La Trobe and taught a course on Revolutions. His expertise would be the Mexican Revolution! In 1968, as a first year, very naive university student I donned the beret, jeans, chunky sweater and desert boots  to attend a lecture on Mexican History. It was the only unit available to fit my timetable. The lecturer was David Potts. Music played as I entered the lecture theatre. Something in Spanish. There were about 100 of us barely out of school, pimply first years.

David asked us to work in pairs, taught us a specific listening technique where we took it in turns to actively listen, without interruption, while the other person introduced themselves. Hang on a minute…no, no, no…this isn’t what we do in lectures…in lectures I sit and you talk! I’ve got the empty brain.. you’ve got the pearls of wisdom.. you pour the pearls into empty brain..show a few slides… some smart arse kids ask questions and then its over…lecture done… on to the next one… that’s how its supposed to work!

We looked forward to his lectures. He was a natural story teller and history came alive in his hands. His travel photos, sense of humour, love of art and deep knowledge of his subject were a gift to us students. We sang songs, revelled in mythology and verse, and continued using deep listening techniques to engage our learning. Meta learning and subject matter. A radical idea in 1960’s.

La Trobe University, his house near the university and the block of natural bushland on the river became David’s life. He leans forward and says to me ” Did I tell you how I used to row on the Yarra river and run 8 kms to the university every day? It’s one of his favourite stories. He loves it when I remind him he was also playing tennis 3 times a week in his 70’s. It’s the image he wants to hold on to – a strong, athletic man with an agile brain. The author of books and articles. The man who loved entertaining and where we knew we’d always get the only meal he could cook- lamb shanks!

David retired from university and continued to write. But after a stroke he was diagnosed with dementia. For some years he confused the medical profession because he was lucid, logical, able to see patterns in argument and still able to analyse thoughts, play with words and meanings. These capabilities continue in varying degrees, to this day and he has had many neuroscientists scratching their heads. This was all at odds with the diminishing memory and the frustration and anxiety at not being able to remember even the simplest process, word or event. What is a wombat? he asked me once.

His wonderful illustration  skills have diminished but he still loves drawing and singing. His carers take him to cafes for his beloved cake and cappucino and to a weekly singing group. His 2 year old grand-daughter is the love of his life. When I told him our son would bring her to see him at the weekend, David said to me ” Oh that’s lovely. I love her so much. But I don’t know what to talk to her about anymore.”

I ask David the key questions of 50 Faces: 50 Lives

What are the good things about being this age and what are the bad things?

Nothing much is good……I’ve got dementia and it’s awful…I can’t remember things.  (Are there things you like to do?) I like singing when Di comes and takes me to the group..but I don’t think I’ve been for ages. I’m lucky to have people come and see me but most of the time I feel very tired and can’t remember things.

Do everything you want to do when you’re young. Keep fit and spend time in nature. Don’t get dementia. Sing a lot.

I gave David a copy of this article to review. He couldn’t remember much about it but on a piece of paper he’d written –Nora  8kms to La Trobe

He liked the fact that I mentioned he used to be fit and that he ran to the university. He asked me to add that it was 8 kms. I’ve now made this  edit. Thank you Dr Potts of Gold.

Word and Images by Nora Vitins

Art work- A Cottage for Lil with birds by David Potts