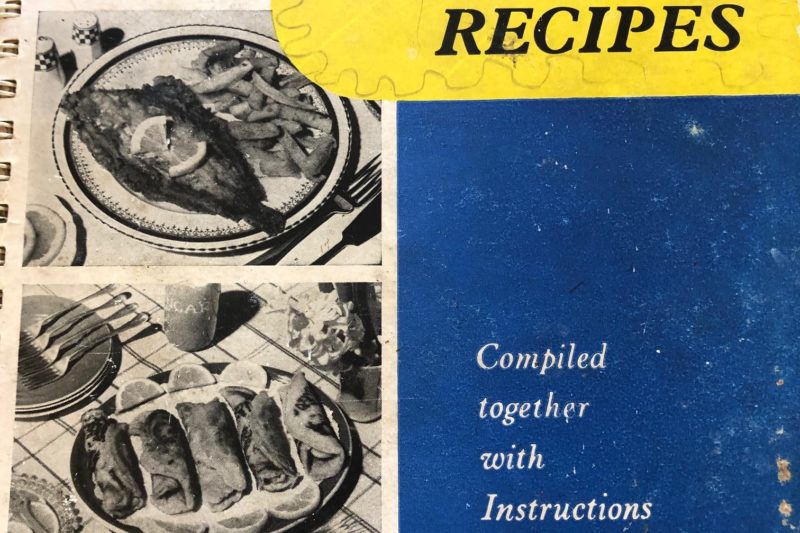 My Mother (who you are getting to know quite well by now….) was not a good cook.  The key goal of her cooking was to provide food that would make the family feel full ie not hungry. If we ate for an army of 500 and clutched our stomachs because they were about to explode she smiled happily. Forget plating up,  garnishes, recognizable vegetables and sublime palette experiences. In her 1950’s kitchen it was the REVO cookbook that very occasionally steered her away from the staples of sauerkraut, knackwurst and overboiled potatoes….very, very occasionally!

I found the REVO cookbook in my packing and now unpacking. Its yellow wilted pages a testament to its 1950’s vintage. What a wonderful book. While my sister and I listened to Elvis and Bill Haley (Sisco’s music not mine) Mum rustled around the kitchen on a Sunday morning baking her Piroshki (which were nice yeast crescents filled with peppery bacon and onion) while I craved English food…really stodgy 1950’s English food presented in the REVO cookbook.

The introduction begins…“The housewife, embarking upon electric cooking for the first time, will find this volume a most useful source of information.” For women owning the new REVO electric stove the oven switch was called the REVOSTAT and ” housewives” were instructed not to clean the oven when it was switched on!

As I grew up the REVO cookbook was my distraction and I would sometimes make the cakes and puddings from its stained and well worn pages. No glossy images here. No team of food stylists. 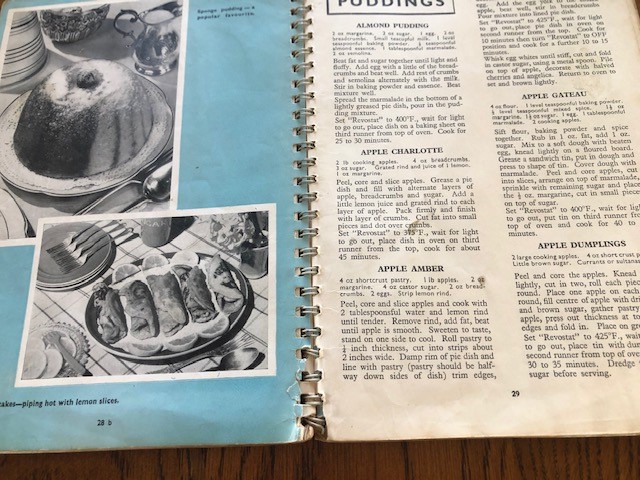 The Revo recipe book knew cooking with 5 ingredients before it became a novelty. Here are a few of the most exotic/ interesting from 1950’s fare.

Cook the rice until tender and drain well. Flake the fish and remove the bones. Heat the margarine in a saucepan and add fish and rice..season well. Add chopped boiled egg and heat the lot through. Ugh..Blandsville!

The modern version suggests you add curry powder, sultanas and cream…thank you google….

One recipe I remember mum making from the Revo cookbook is Gingerbread and its first cousin, Parkin.. both spicy cakes  with a texture a bit like banana bread.

Since this is a time of social isolation, finding things to do and having fun Nora’s test kitchen came up with this variation on theme.

Set oven to 180. Use a small biscuit tray, lined with baking paper.

In the food processor throw  about 200gm butter, 2 eggs, half cup of honey, half cup brown sugar, a good throw of mixed spice and a smaller throw of ginger, cup of SR flour, half cup of quick coats, handful of sultanas, handful of chopped dates. enough milk to make the mix like a batter…I forgot the 1/2teaspn. Bi carb of soda…probably a good idea to add. Mix it all up. Throw it in a tin. Sprinkle some slivered almonds or similar. Bake about 20-30 mins. Then settle back with a good strong cuppa and a piece of Yorkshire man’s Parkin…….

In these strange times it’s fun to create a touch of nostalgia with a hint of modernity. Check out the old cook books you have around and send in your favourite recipies. Oh and please note the food styling effort made in the last Parkin picture…organic mint leaves from my very own, north facing, side of the hill herb pots!